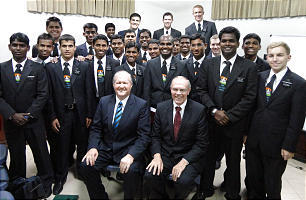 We not only have missions in India, but we also have districts that are preparing to become stakes. The Church is being established in India in a deliberate and impressive way. And although North American members are contributing in important ways to the spread of the gospel in India, the Indian members themselves are the driving force as the truths of the Restoration spread across their land.

As I became acquainted with our Indian Church members, I kept thinking of President Gordon B. Hinckley's words: "The lives of our people must become the most meaningful symbol of our faith" (Ensign, April 2005). The power of the restored gospel of Jesus Christ can be found most easily not in the beauty of the buildings we construct but in the lives of individual members. I found such power as I became acquainted with those who have joined the Church in India.