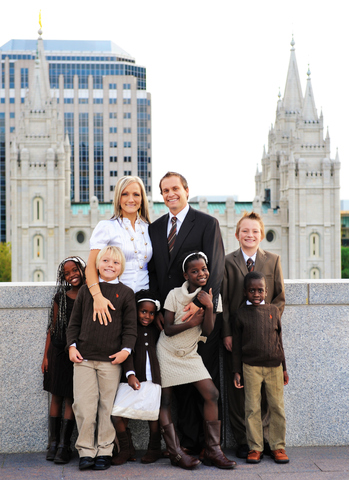 10 months after rescue of daughter from Haiti, family is sealed

Last Friday dawned with the promise that Jeremy and Hollie Wardle would finally reach the culmination of their journey to bring their family together. They and their children would finally be sealed to the last addition to their family—their 7-year-old, Gabbie.

“When all six of the kids came in, in their white clothes, and Gabbie being asked individually to come kneel across the altar with us—it was so beautiful,” Jeremy said afterward.

There were times when they wondered how far away this day was. In particular, January 12, 2010, dawned with a new challenge and a special reason for concern: Gabbie was still living Haiti when the infamous earthquake hit.

Though the Wardles would soon learn that Gabbie was safe, they were told that the crèche where she lived had supplies for only two days. Jeremy and Hollie leapt into action, calling friends and family to help them reach her and help the crèche.

“We always felt like Gabbie was coming home,” said Hollie. “But I just kept saying to [Jeremy], ‘This is so much bigger than I think you or I can imagine.’ Even though Gabbie is our priority, they’re our priority, too.”

Within a week, Jeremy had flown to the Dominican Republic (the only means of access to Haiti during that time), connected with Utah Haiti Relief volunteers who would help bring supplies to the Creche and fly out orphans, and gotten to the orphanage in the nick of time. For three days Jeremy and some of the volunteers stayed at the orphanage, accepting new loads of aid each day, until Gina Duncan, who runs the crèche, returned from a 72-hour stint at the U.S. embassy—18 visas in hand for some of her orphans to get to their adoptive families. Jeremy and the UHR volunteers were able to fly the children out and help bring them to their families in the U.S.

Helping these other orphans was rewarding for Jeremy and Hollie, but it was with particular relief that, on January 23, they were able to bring Gabbie safely home to Bountiful, Utah.

Now, 10 months later, life with Gabbie is finding its rhythm.

“She’s really found her place in the family. It’s been a really good acclimation process,” said Jeremy, though he added that it hasn’t been without challenges. “Anyone can study on adopting older kids, and there’s issues. Not to say that we’re without, but she’s been an angel. A lot of issues are not hers but us getting used to her.”

Gabbie, for instance, loves to find out what other people are doing. “She’s kind of a nosy little girl, which I love about her,” said Jeremy, chuckling, “but it sometimes rubs her older brothers wrong and we have to chitchat about it. The hardest part and the most beautiful part is that everybody is so different.”

With six children—four of them adopted from three different families—the family has a lot of individuality to deal with. Jeremy and Hollie try to emphasize the different strengths and talents of each child and remind the others to value their own talents and never be jealous. “The earlier we parent those potential challenges, it’s easier to deal with it,” Jeremy said.

“None of this would be possible without my wife—being able to stay home and be a good mom,” he added. “There have been sacrifices on all ends, but they’re really not sacrifices in the long run. They’re good things.” And these good things keep them going.

Undoubtedly, one of the best things the Wardles have experienced was their family sealing last Friday.

“It was beautiful,” said Jeremy. “We asked the kids, since it was the very last time we would be there until they received endowments, that they would try to remember everything about the temple—that they would just sponge it up. And they did.”

For Kaden and Cole—the oldest of the Wardle children—this was the third time they got to experience a family sealing. Jeremy believes this latest experience had perhaps the most profound effect on them. “They’re still kids, but they have a spiritual maturity that just makes me pleased. They know that they’ve been able to experience cool things. Kayden has been to Haiti, they’ve experienced the death of their brothers. It’s allowed them to mature,” said Jeremy.

While distance separates the Wardles from some of their family (Hollie’s parents are on a mission in Russia and one of her sisters lives abroad), several friends made it to the occasion, including the three men from Utah Haiti Relief who helped to rescue Gabbie from Haiti. “It took so long to get out of the sealing room because everyone had to hug each one of our kids,” he said, “and our kids really went and hugged everybody.”

But one of the best moments for Jeremy witnessing Gabbie’s excitement and awe as she knelt at the altar on her “special sealing day.” “She just kept looking back and forth at our eyes the whole time—not nervous, but like, ‘wow!’”

Jeremy has returned several times to Haiti during the past year. As part of an ongoing effort with Utah Haiti Relief (UHR, utahhaitirelief.com), Jeremy and Hollie try to promote aid wherever possible, even when they can’t go down. Some of the most exciting developments for UHR have been the building of a hotel, a hospital, and a women’s center, the last of which was built particularly for women who lost husbands and limbs after the earthquake. And of course, he and Hollie continue contact with the crèche that three of their children came from.

In fact, Jeremy will be returning to Haiti in January to help Hollie’s sister in her adoption of a little girl from Gabbie’s crèche. And she’s not the only one adopting. In addition to Hollie’s sister, two UHR friends, the Wardles’ neighbors, and Jeremy’s business partner have decided to adopt children from the crèche because of contact with the Wardles. Gina Duncan, who runs the Creche Enfant Jesus in Haiti, calls these children her “little ambassadors.”

“It just shows how wonderful these kids are,” says Jeremy. “People get attached to their spirits. Something is resonating to others.”

These children have resonated in the lives of many, especially the Wardles, and though the journey to bring their family together has brought unique challenges, they’re happy with where they have come.

“Every family has their own set of challenges, but I think the beautiful part is we have a choice of what the outcome is going to be,” said Jeremy, recalling the loss of two boys that initially motivated them to adopt. “We could still just have two boys and be sad that we lost a couple boys, but we opened our hearts to what the Lord wanted, and not only do we have another four beautiful children, but they have just fulfilled us beyond measure.”