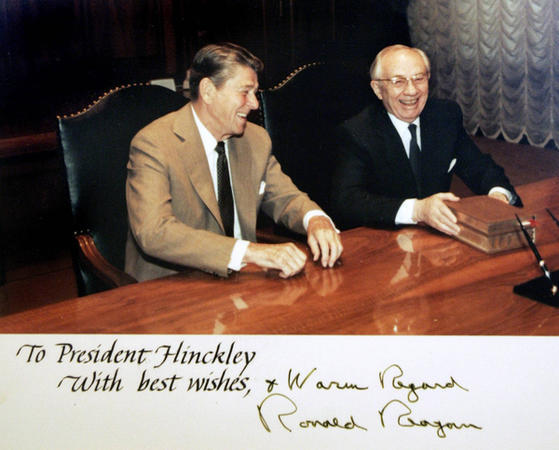 11 Fascinating Connections Between the Church and the White House

In 2004, U.S. President George W. Bush presented the Presidential Medal of Freedom to LDS Church President Gordon B. Hinckley in a ceremony at the White House.

"Millions of Americans reserve a special respect for Gordon B. Hinckley, who still works every day as President of the Mormon Church, and who, on this very day, turns 94 years old," President Bush said as he bestowed the nation's highest civil honor on the LDS leader, according to LDS.org.

"Mr. Hinckley is the grandson of Mormon pioneers and has given devoted service to his church since 1935. He’s always shown the heart of a servant and the gifts of a leader. Through his discipline and faithfulness, he has proven a worthy successor to the many fine leaders before him. His church has given him its highest position of trust, and today this wise and patriotic man receives his country’s highest civil honor."

The moment was a highlight in the history of interaction between leaders of The Church of Jesus Christ of Latter-day Saints and the presidents of the United States.

Relations between the LDS Church and the White House haven't always been so agreeable, especially during the early days of the Restoration. But with time, membership growth and a long-term display of civil/patriotic service by church members, a mutual respect has blossomed.