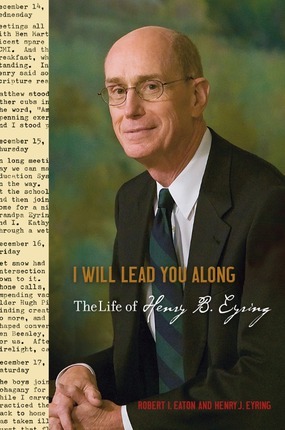 7 Marriage Lessons from the Life of an Apostle

We’ve all heard the statistic: somewhere between 40-50% of marriages in the U.S. will end in divorce. It’s not a pretty figure. While Latter-day Saints generally have a lower instance of separation and divorce, we aren’t exactly immune, though some of us have definitely done a better job mastering marriage than others. To learn from the example of one of the best of us, we searched the life of President Henry B. Eyring to find an apostle’s secrets to a successful marriage. After meticulously combing through the detailed and insightful new biography, I Will Lead You Along, we bring you seven marriage lessons his life exemplifies:

1.  Make your spouse and family your top priorities

“I felt impressed with my obligations first to Kathy and our boys, and with the critical need to have the peace of the gospel in my heart to be effective at home and in my Ricks College service.”

While a career is important to help provide, putting your spouse and family first leads to happiness in the home.

This was a theme repeated in Elder Eyring’s life over and over again, as was the case in this instance:

“For one night, the matter seemed clear to Hal. He didn’t have a clear spiritual feeling, but the balance of evidence, particularly Kathy’s impression and his father’s counsel, suggested that he should stay. President Peterson’s blessing cleared the way for him to make that choice, even without an answer to his prayers.”

Later that weekend, Elder Eyring’s own confirmation came, but trusting his wife in the interim allowed him to move forward until he could receive his own witness.

The Eyrings shared a number of hobbies throughout their marriage, both as a couple, and as a family.

“They took up skiing and golf in Rexburg, involving the boys in both (mostly just driving the golf cart, in the latter case). And they continued to play tennis occasionally. In fact, Hal and Kathy perennially advanced to the final rounds of the college’s doubles tournament. In 1975, they won, defeating the city champions, two male members of the Ricks faculty.”

Throughout the years, the Eyrings have continued to spend time together, and their shared hobbies have helped to strengthen their relationship.

Little things, like flowers and love notes, matter. Elder Eyring, in addition to such gestures, gives us a perfect example of keeping love alive:

“After dinner we watched the movie ‘Forever Young,’ with Mel Gibson. The romantic ending is of young love reunited. The music at the end of the film, as it was in the beginning, was Billie Holiday singing, ‘The Very Thought of You.’ We, Kathleen in tennis shoes and I without shoes, danced on the basement carpet until the last note.”

Serving others builds a strong foundation in the gospel and helps to develop charity, as Elder Eyring related:

“I told Kathy I wanted to be with her for eternity. In her special spiritual and practical way, she said, ‘Well, then let’s take some of the people from the Golden Living Center for drives on Sunday. They’d like that.’”

Make sure to serve one another, as well. While President Eyring was serving 12-hour days in the presiding bishopric, he still helped his wife fixed pancakes, eggs, and bacon for breakfast. Then, in his words,

“I drove John and Matt to school, and then took Elizabeth to the library. We drove home for her to change. Then I drove around Bountiful to pick up her classmates and dropped them at Linda’s Little Learners.”

6.  Never take your spouse for granted

Sometimes it is easy to be blinded by our own troubles, and forget the hard work of others on our behalf. After a particularly trying day, Elder Eyring wrote warmly,

“This long day at the office was warmed by Kathy. She missed me while I was gone, needed me with the boys, and blessed me with feelings of being loved and important to her.”

Whether Sister Eyring spoke her affection or simply showed it, feeling loved and needed is a blessing to both spouses.

7.  Be understanding and forgiving

Surely, no marriage is perfect, and being married to a busy scholar and later apostle requires much understanding and patience, as Elder Eyring noted of his wife:

“Kathy seemed content to let me go back to the office for another computer run, even when I called at after eight. She’s genuinely happy when I do something useful for the kingdom.”

It is easy to be frustrated and disappointed when life takes a turn for the unexpected. Understanding your spouse, what is important to them and why, and forgiving any misunderstandings is critical a long and happy marriage.

BONUS: Stick around in the hard times

Of his wife, President Eyring has said, “I found out when the game gets tough, she gets better.” Every marriage has its ups and downs. There are easy days, and there are hard days. But sticking with it, for better and for worse, will lead to eternal blessings.

This is the third in a three-part blog series about President Eyring. Be sure to read parts one and two, and to get more stories from his daily life and marriage, check out I Will Lead You Along, by Robert Eaton and Henry J. Eyring, available at Deseret Book.