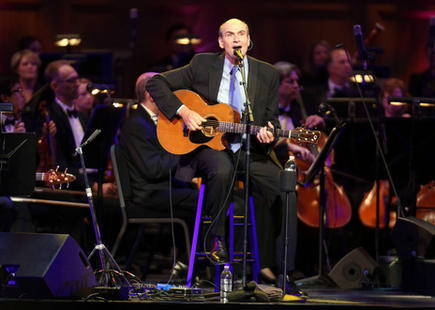 In a match that was years in the making, on a stage in the Salt Lake LDS Conference Center, two American icons formed an unlikely union, and the result was a remarkable night of music, with an encore still to come.

Who knew James Taylor and the Mormon Tabernacle Choir would ever even appear in the same sentence, yet alone on the same stage, but there they were Friday night. Tonight they will do it all over again.

Taylor alternately teamed with the choir and the Utah Symphony to sing several of his classic songs — “Lonesome Road,” “Shower the People,” “My Traveling Star,” “And Shed a Little Light,” among others. He also delivered solo renditions of “Fire and Rain,” “Carolina in My Mind” and “Secret of Life,” as well as covers of two traditional songs, “Water is Wide” and “Getting to Know You.” He drew a standing ovation with his performance of "Shower the People."