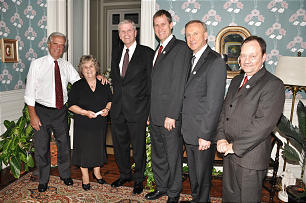 Tabaré Vázquez, former president of the Republic of Uruguay until one year ago (March 1 2005 — March 1, 2010), received a visit in his family home in Montevideo from the South America South Area Presidency on Monday, March 21. The visit was warm and friendly as the Church leaders were welcomed at the door by Dr. Vázquez and his wife, María Auxiliadora Delgado, the former First Lady of that country.

Elder Mervyn B. Arnold of the Seventy and president of the South America South Area, thanked President Vázquez for some decisions during his administration on different matters that coincide with Church issues.

Then-President Vázquez signed a decree forbidding the use of tobacco in closed public places, which became known as "Thanks a million" (Un millón de gracias) because it was successfully proposed that one million Uruguayans approve this decree with their signature in a web page. The decree includes restrictions in publicity for tobacco products. Dr. Tabaré Vázquez, being a renowned oncologist in Uruguay, has always worked as a physician treating cancer.