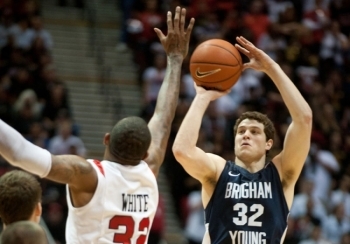 BYU jumps from No. 7 to No. 3 in The Associated Press' college basketball poll this week.

The Buckeyes, who were No. 1 for four weeks before falling to second for two weeks, replaced Duke at the top of the rankings Monday.

Ohio State received 45 first-place votes from the 65-member national media panel, easily outdistancing Kansas, which moves up one place with 14 No. 1 votes.

BYU, which had five first-place votes, jumped from seventh to third, while Pittsburgh remained fourth, tied with Duke, which lost at Virginia Tech on Saturday and had one first-place vote. Purdue, Texas, Notre Dame, San Diego State and Wisconsin round out the top 10. Duke picked up the last remaining first-place vote.