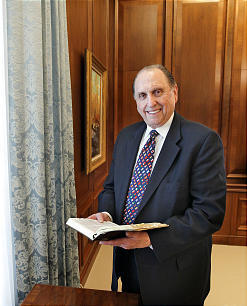 Catching up with President Monson before his 84th birthday

President Thomas S. Monson, who was named the top octogenarian in the United States in 2009 and 2010, will observe his 84th birthday on Sunday, Aug. 21.

An online current affairs and culture magazine, Slate, listed President Monson among "80 people over the age of 80" in last year's "catalog of the nation's silver lions: fourscore elder statesmen, titans of industry, cultural icons" and others who have remained influential in their ninth decade and beyond. In making its announcement last December, Slate stated that President Monson "stands atop the list. As the divine prophet, seer and revelator for 5.5 million Americans and more than [14] million people around the world, he's the most powerful 83-year-old we could find."