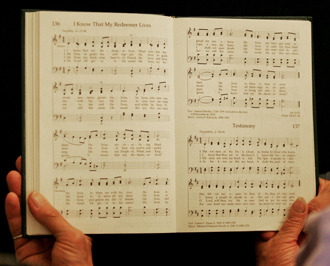 Christian churches, including the Latter-day Saints, share many hymns

Four decades ago, when my wife Dianne and I were active Baptists, somehow we ended up with a Baptist hymnal in our home. This same kleptomaniac-like behavior has surfaced on multiple occasions with respect to LDS hymnals. We even have an LDS hymnal embossed with “Joseph Smith Memorial Building.”

Our Baptist hymnal is a part of the 22nd printing of the once widely-used, 1956-copyrighted edition published by Convention Press in Nashville, Tenn.

Dianne and I were married in The First Baptist Church of Hartwell, Ga., by her cousin minister in 1968. Five years and two children later, we became the first two converts in my small hometown of Wetumpka, Ala., to what the world calls “Mormonism.” Through the ensuing years subsequent to our conversion to The Church of Jesus Christ of Latter-day Saints, we received much enjoyment sitting at the piano and singing some of our favorite hymns from this old Baptist hymnbook — hymns that we learned and loved throughout the 1950s, ’60s, and early ’70s and still love today.