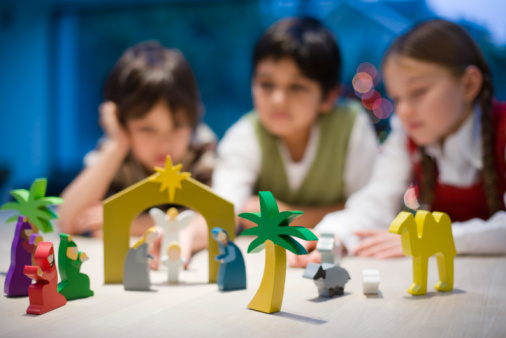 Preparation:
Obtain a nativity set that has the following pieces: Angel, Shepherd, Wise Man, Mary, Joseph, and Baby Jesus. Place the pieces in a box. Put a table at the front of the room to set the nativity on as the children participate in the activity. If your nativity has additional pieces, such as a stable or animals, place them on the table before sharing time begins.

Familiarize yourself with the testimonies below and print the scriptures onto strips of paper.

Presentation:
Ask the children if they have ever seen a nativity set before. Explain that nativities are often used as Christmas decorations to help us remember the birth of Jesus. Tell them that they are going to help you set up your nativity set, and that they will learn more about the testimonies of each of the people represented as they do so.

Ask a child to choose a nativity piece out of the box (you may want to reserve the baby Jesus for last). Have them show it to the other children and ask who the figure represents. After they have determined who it is, let the child place the figure onto the table. Ask a child to read the accompanying scripture(s) that expresses that person’s testimony. Discuss the scripture to help the children understand each testimony.

If you desire, you may sing Christmas songs that the children are familiar with during the activity to reinforce the concepts taught.

Angels: An angel announced Christ’s birth to the shepherds.
Luke 2: 10-11. And the angel said unto them, Fear not: for, behold, I bring you good tidings of great joy, which shall be to all people. For unto you is born this day in the city of David a Saviour, which is Christ the Lord.

A choir of angels sang when Jesus was born.

Luke 2: 13-14. And suddenly there was with the angel a multitude of the heavenly host praising God, and saying, Glory to God in the highest, and on earth peace, good will toward men.

Mary: Mary was chosen by Heavenly Father to be the mother of Jesus.

Joseph: Joseph was chosen by Heavenly Father to take care of Mary and baby Jesus on the earth. His testimony was in the form of actions, not words.
Matthew 1:20-21, 24-25. The angel of the Lord appeared unto him in a dream, saying, Joseph, thou son of David, fear not to take unto thee Mary thy wife . . . She shall bring forth a son, and thou shalt call his name JESUS: for he shall save his people from their sins. Then Joseph . . . did as the angel of the Lord had bidden him, and took unto him his wife: She . . . brought forth her firstborn son: and he called his name JESUS.

Shepherds: The shepherds came to see baby Jesus after an angel told them He was born. They then told others what they had witnessed.
Luke 2:15-17. The shepherds said one to another, Let us now go even unto Bethlehem, and see this thing which is come to pass, which the Lord hath made known unto us. And they came with haste, and found Mary, and Joseph, and the babe lying in a manger. And when they had seen it, they made known abroad the saying which was told them concerning this child.

Wise Men: The wise men were righteous men sent to witness the presence of the Son of God. They followed the star and brought gifts to the young Christ child.
Matthew 2:2, 11. Where is he that is born King of the Jews? for we have seen his star in the east, and are come to worship him. And when they were come into the house, they saw the young child with Mary his mother, and fell down, and worshipped him: and when they had opened their treasures, they presented unto him gifts; gold, and frankincense, and myrrh.

Baby Jesus: Jesus Christ testified of himself to the people in the Americas the night before he was born.
3 Nephi 1:13-14. On the morrow come I into the world, to show unto the world that I will fulfil all that which I have caused to be spoken by the mouth of my holy prophets.

Jesus also testified of himself after he was grown.
John 14:6. Jesus saith unto him, I am the way, the truth, and the life: no man cometh unto the Father, but by me.