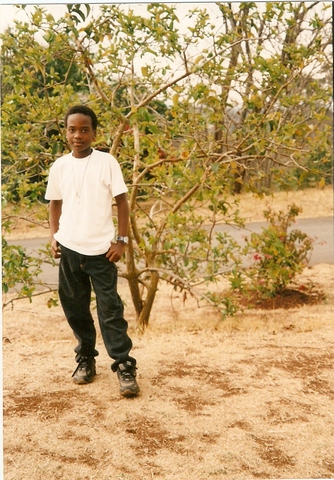 Exclusive: Escape from Rwanda: The Impossible Story of John Bizimana

People fill the tent and stand outside its edges to watch Voice of Africa perform. The members’ bright costumes, strong dancing, and energetic personalities enthrall the crowd. A young man with a microphone engages the audience. He jokes about African men’s strength, yet he’s modestly wearing a black tee-shirt. John Bizimana is confident, charismatic, and carries himself with maturity and experience beyond his twenty-four years.

The group is at the KSL Book Festival to promote John’s memoir Escape from Rwanda: a True Story of Faith, Hope, and Survival, but you get the impression that it’s not about him.

John takes time to introduce each of the eleven members of Voice of Africa by name and nationality, and during one song he stands so far in the background while his friends perform that you can barely see him singing and clapping in rhythm. It’s not about John.

At least, not according to John: because he continually looks beyond himself.

When I spoke with John a few days before the performance, I was impressed by his positivity and humility. Throughout our conversation he alluded that life is difficult for everyone, as if his has not been any more difficult than others’. But John’s trials exceed most American’s worst imaginings.

In 1994, just months after his father was killed in a car accident, seven-year-old John and his family fled the Rwandan genocide with only the belongings they carried. They trudged past scenes of violence and death to Zaire (now the Democratic Republic of Congo), then traveled through Tanzania and Zambia before finally finding refuge in Zimbabwe. Tragedy struck John’s family again when his mother died from cancer and malnutrition. At first his mother’s friends cared for John and his younger brother and sister, but eventually the Bizimana children were left in an orphanage.

In fact, a portion of the proceeds from Escape from Rwanda will go to the Emerald Hill Children’s Home where John and his siblings lived for five years. I inquire about his decision to donate to the orphanage, and he is perplexed that I even have to ask. For him, giving back was second nature. “I grew up there,” he says. Instead of taking the opportunity to showcase his generosity, he explains that the orphanage runs on donations, largely from Europe. He speaks with admiration of the head nun, Sister Gabriel Flender, a German woman who has chosen to devote her life to this orphanage in Zimbabwe. Again, it’s not about John.

This isn’t John’s only way of giving back. For the past two years he has performed with his friends in Voice of Africa. “We’re not professionals,” he says humbly, “but...it’s a way of reconnecting with our cultures.” The group also has a charitable component: they raise scholarship money for their members who are mostly African college students. In addition, they hope to spearhead a larger-scale humanitarian project in Uganda.

John did not initially set out to tell his own story. When an older woman suggested that John write a book, he declined saying, “I’m not famous.” But John’s story so moved the woman that she offered to write the book if he would dictate his experiences to her. Her willingness to sacrifice her time impressed him.

“It never occurred to me that, you know, this was...a story that was worth telling until someone else pointed it out to me,” he says. John didn’t accept her offer. He still didn’t consider writing his story until months later while doing an internship in Switzerland.

“I just had this strong impression that I needed to be doing something else,” John says. So he began writing his memoirs.

John’s book narrates not only his childhood experiences in Africa, but his life as a teenager in Europe. John and his siblings emigrated to Belgium when his aunt and uncle legally adopted them. Though reunited with family, they still lived difficult lives as refugees. At a street basketball tournament in Brussels, John met missionaries from The Church of Jesus Christ of Latter-day Saints. He later joined the Church—a choice he says has given him “direction.”

“For me, it’s the religion that brings me closest to God...It has given me answers...that I yearned for when I was a younger teenager.” With characteristic humility, he adds, “My dream is to just one day be a good member of the Church. I’m not there yet, but one day. That’s my goal.”

John has achieved many goals despite impossible odds, including his childhood dream to come to America. At the urging of some friends in Belgium, he set his sights on Brigham Young University in Provo, Utah. He and his sister pooled their savings to pay for the Standard Achievement Test fee, and he scored well enough to be admitted to BYU.

John considers graduating with a bachelor’s degree in economics his greatest victory in life. He acknowledges that college and the finances involved are difficult for everyone, but John didn’t even graduate from high school. He is the first in his family to attend college, and he did so alone, with his family still halfway across the world in Belgium.

John has thrived on three continents, yet when asked what he is most proud of, it isn’t himself. You can hear the love in his voice as he talks about his siblings. “They were younger than me...and went through the same things I went through, but they remained good kids. They maintained their composure throughout the whole process.”

When you talk to John it is easy to forget that he saw the violence of the Rwandan genocide and survived so many difficult trials. He chooses to focus on the positive. He jokes and laughs and enthusiastically says that he wants to “enjoy life.” When he’s not working full-time, performing with Voice of Africa, or speaking in public, John likes to play soccer, cook, and spend time with his friends.

Indeed, his friends are the ones who told him he had a gift for raising people’s spirits and indirectly led him to motivational speaking. He hopes to spread his message of confidence and courage full-time someday. “The hardest thing you will ever have to do is not to actually find the resources...it will be to actually believe that you can do it,” he says. John particularly enjoys speaking to youth, because they still have their lives and dreams before them.

Because so many people have doubted him, even in his ability to write a book, he wants others to know that they too can succeed while they are still young. Ever humble, he also says, “I feel like I can’t really tell anything to the older people.”

But this time, John is wrong.

Everyone, young and old, can learn a lot from John Bizimana. His story is miraculous enough to inspire even the most experienced reader. Escape from Rwanda is about John, but it is also about achieving dreams in spite of terrible circumstances. It is about living with hope and moving forward with faith. The book echoes the advice John gives the audience at the conclusion of Voice of Africa’s performance, “If you have a dream, do not hesitate to pursue it.”