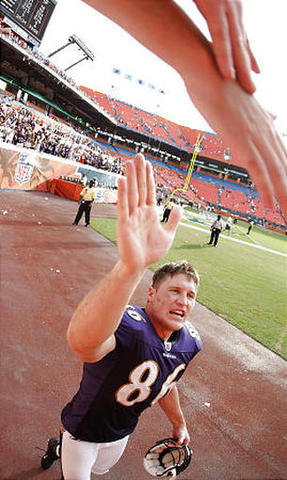 In a brash NFL world, Ravens' Todd Heap has relied on faith to give him structure

In a violent world, where grown men curse and taunt each other in their struggle to reach the end zone, the Ravens' Todd Heap is strictly PG.

Heap doesn't smoke, drink or swear. "Gosh darn" are his naughtiest words. The tight end won't talk trash, but he'll take out the garbage without being asked. He doesn't carouse, like many teammates. Tattoos? You won't find one on Heap's 6-foot-5 frame.

"Todd leads a great life," said Haloti Ngata, the Ravens' Pro Bowl defensive tackle. "When I came here, I looked up to him. I knew that if I followed him, I could have a great life in the NFL, and also at home."

Like Heap, Ngata is a member of The Church of Jesus Christ of Latter-day Saints and one of four Mormons on the Ravens' squad. The others are defensive end Paul Kruger and rookie tight end Dennis Pitta. No NFL club has as many LDS members.

That's a plus for the Ravens as they enter the playoffs, team officials said. Basic tenets of the Mormon faith, such as devotion to family, humility and respect for one's elders, all translate to football.