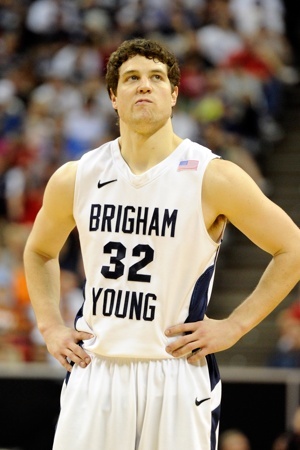 Jimmer could land with Knicks

BYU's Jimmer Fredette, out of upstate Glens Falls, doesn't mind if he falls out of the lottery, even if it costs him money on his rookie contract. All Fredette wants is a team where he's a good fit.

And, yes, Fredette, the National Player of the Year, believes Mike D'Antoni's high-speed Knicks, who select 17th, are a match made in heaven.

Fredette, the BYU 6-foot-1 sharpshooting point guard, told The Post at yesterday's pre-draft camp here he has agreed to work out for the Knicks in Westchester on June 2.

"It's a team that's definitely intriguing especially with their style of play," Fredette said yesterday. "Being able to get up and down the court, that's what we did at BYU. That's how I feel comfortable playing. Obviously, being from New York and liking the Knicks growing up, we'll see."