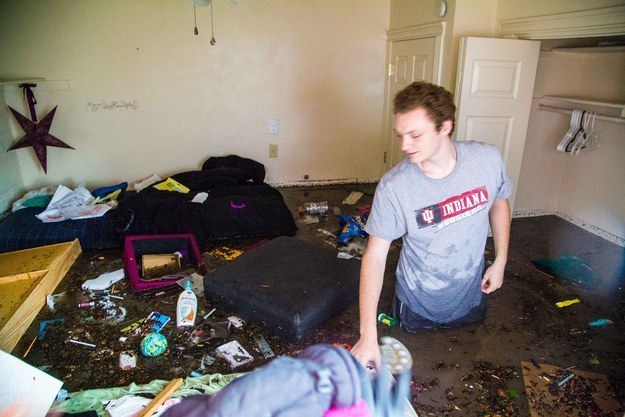 Susie Atwood got the hug of her life when her youngest son, William, returned home from his mission.

A widowed mother of seven, Atwood went five straight years with children in the mission field. When her youngest came home, her excitement was unrestrained. As was his! William, a high school football player, made it pretty obvious just how thrilled he was about the reunion.

On Tuesday, 30 LDS temples began showing a third new firlm in the rotation of temple instruction videos. The first new film in 20 years was introduced only a year ago, with a second following six months later. This latest film will add even more variety to temple instruction, and will soon be showing in most temples, with multiple languages as time goes on.

-->Read more about it here!

-->Find a temple near you that's showing the new film!

In a day when miracles are often scoffed, there is a girl that is a living example that miracles – along with angels – do indeed exist.

With policeman at every door, hallway, and entrance of the Houston LDS church, and large media trucks parked strategically across the street, it was a surreal scene as mourners, supporters, and family members entered to attend the funeral for the six victims of the recent Texas shooting massacre.

Upon entering, eyes were immediately drawn to six glossy white caskets lining the front of the chapel, beautiful floral sprays draping the tops.

It was hard to know how to make sense of the circumstances of the last five days when a family was murdered, with 15-year-old Cassidy Stay as the sole survivor.

Services were held Wednesday for Stephen and Katie Stay and Cassidy's four siblings: Bryan, 13, Emily, 9, Rebecca, 7, and Zach, 4. On the stand behind the caskets were large black and white individual photos of each family member. In the center – just as they were in life – was a photo of husband and wife – and best friends – Stephen and Katie, smiling. Happy.

We asked our Facebook fans to submit their very best (or worst) pick-up lines. Whether or not you’re single, these hilariously awful Mormon-y pick-up lines will have you rolling your eyes and laughing.

These lines are perfect for an awkward first line at an EFY dance or even a YSA mix-n-mingle. So just in case you need a really cheesy pick-up line sometime, just check out our handy list of the top ten!

1. I just got off my mission, and I’m looking for my next companion.

7. Are you a Gadianton robber? Because you just stole my heart.

19 Shocking Moments of the BYU-Idaho Flood

On July 15th, a flash flood took Rexburg, Idaho by surprise, turning streets into rivers and basements into catch basins.

The community rallied together to help those whose homes were flooded, and BYU-Idaho is up and running again, but it was a storm the people of Rexburg won't soon forget.

-->Here are just a few of the jaw-dropping photos and videos from students at BYU-Idaho.