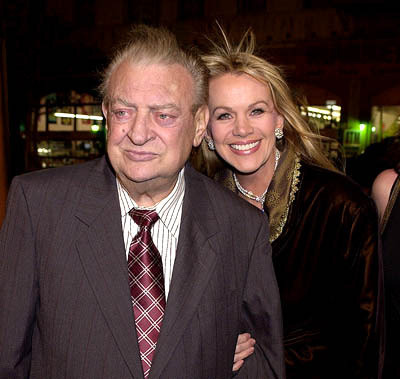 Did you know that Mayim Bialik from The Big Bang Theory and Larry King both married Mormons? Find out which other famous people have married Mormons in this fun list!

Famous for the line "I don't get no respect," comedian and actor Rodney Dangerfield (born Jacob Rodney Cohen) married Latter-day Saint Joan Child in 1993. According to The Washington Post, the pair actually first met back in the '70s when Dangerfield approached the flower shop counter where Child was working and asked her, "What kind of drugs do you like?"

More confused than anything, Child replied, "Antibiotics, I guess."

Dangerfield was intrigued by her endearing answer, and the pair dated on and off throughout the years until their marriage in 1993.

--> Find out other famous people who have married Mormons.

Last night at the November CES broadcast, Elder Paul V. Johnson of the Seventy made a few significant announcements. He first announced that, beginning in January 2015, the basic format of CES Devotionals will be changing. First, they will no longer be called CES Devotionals, but instead will be referred to as "Worldwide Devotionals for Young Adults." In addition, the number of broadcasts will be reduced to only three times a year--January, May, and September--in order to emphasize the importance of each devotional.

Elder Johnson also confirmed a rumor that has been flying around the internet over the past week, announcing some core curriculum changes to Church universities and Institutes of Religion.

--> View a list of the new Institute classes offered.

An article on Larry Brown Sports this week reported an interesting story about the young Steve Young.

As a starting quarterback for the San Francisco 49ers, Steve Young was one of the top choices for a cameo appearance in a (then new) comedy by the Farrelly brothers, There's Something About Mary. The brothers reported that after they offered the role to Drew Bledsoe, who declined, they turned to Young.

--> Read what the Farrelly brothers had to say about his decision.

Why the Church Made the Temple Garments Video

A few weeks ago the Church released a transparent new video about temple garments, explaining the sacred, religious purpose of the clothing by comparing them to the religious clothing worn by various other religions. The video took social media by storm, largely through sharing by members with their friends, and was reported on by several major news outlets, including USA Today, The Huffington Post, and The Washington Post.

Many have shared encouraging feedback about the video through social media.

--> Read their comments and the Church's official statement on the video.

Nashville is brimming with talented Mormons. In this country music metropolis, a former bishop has written hit songs for stars like George Strait and Reba McEntire, and a new Young Women president once shared the stage with Dolly Parton. Here, the close-knit LDS community uniquely intersects with a network of exceptional LDS musicians, including veteran songwriters,up-and-coming producers, and some of the hottest acts around.

Church member Tony Martin was a reporter at a Chicago newspaper when his songwriting career took off in the late ’80s. Country music star George Strait recorded a song written by Martin, and soon Martin packed up and moved to Nashville.

“My hobby was paying better than my job,” he recalls. “But when you show up in Nashville with your sack of songs, it’s like opening a store in town—nobody knows the business is open, and you don’t have a lot of product.”

Martin hasn’t had many problems selling his “sack of songs,” however. In fact, he is one of the most successful songwriters in Nashville. His tunes have been recorded by stars like Rascal Flats, Keith Urban, and Tim McGraw, and he has 15 number-one hits under his belt.

--> Find out what other Mormons are making it big in Nashville.