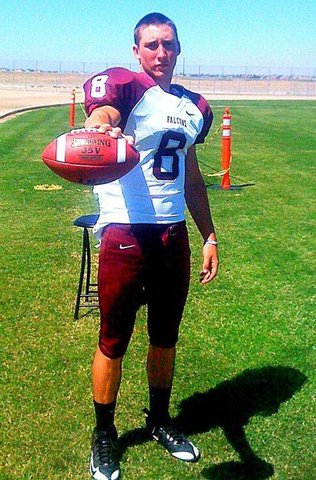 Weeks after an accident that left 16-year-old Tyler Schihabel paralyzed from the waist down, thousands have seen his spiritual and physical strength change lives.

Tyler fell 30 feet off a sand dune in Pismo, Calif. on Sept. 5. His chest hit the handlebars of his ATV and pinched his vertebrae, leaving him paralyzed. In that moment on the hillside he realized he couldn’t feel his legs, and with a calm strength, told his brother and friends not “to freak out.”

Days before the accident, the family had bad feelings about the trip with his friends. Tyler kept getting the feeling that something bad was going to happen and now accepts this new challenge as another lesson learned.

“Now I’m pretty good about following the promptings and knowing that everything happens for a reason,” Tyler said.

Tyler and his family firmly believe that this accident happened for a reason, even if understanding why isn’t clear to them now. Shelly, Tyler’s mother, believes that blessings come out of bad things. Even if it is hard for them to see what lies ahead, they are already seeing their family grow stronger together.

Days after the accident a Facebook account and blog were created in honor of Tyler where people could go to donate money towards his therapy. Through this networking, more than 18,000 followers have witnessed Tyler’s testimony and have been touched by his story.

David, Tyler’s father, said they have had hundreds of people post messages about Tyler’s strength and faith. One atheist commented about Tyler’s trial, saying there is a possibility of a God. Inactive ward members are returning to church and people who have waited years to be baptized are taking that step because of Tyler’s strong faith and dedication in what he believes.

Tyler speaks about his accident as something he should learn from and knows that God still loves him.

“In my mind, God didn’t punish me,” he said. “All things test faith and this has not affected my faith.”

For this Calif. teen, doing what he loves is still possible, even when faced with challenges that test his strength, inside and out. Staying physically strong involves hours of physical therapy to keep his upper body in excellent condition. He is learning how to handle his new wheelchair and using only his arms to support his body’s weight. Tyler has joined a wheelchair basketball team and has caught on quickly.

A few weeks ago, a 5K run was held in honor of Tyler to help raise money. More than 500 people showed up to race next to Tyler. He said the warm swelling in his chest and seeing unfamiliar faces is hard to explain. The feeling of support was so overwhelming and Tyler said it was “unbelievable that they would step behind me and help me out.”

Ward members all over Calif. have helped the Schilhabel’s family from the very beginning. Within hours of the accident, wards and stakes came together to support the family in any way they could. David said the cards, fundraisers, websites and reaction from ward members was overwhelming.

Tyler’s understanding of how much Heavenly Father loves him comes with his testimony that he must rely on the Savior for every detail and struggle. When there are days that seem harder and longer, Tyler is learning to allow his Heavenly Father to take what he can’t and help him when he must get up alone.

Tyler’s long-term goals involve serving a mission. One thing Tyler knows for certain is that he will walk again. “I have no doubt that I will accomplish that,” he said. Tyler and his family are working towards that goal by finding a post-therapy that will get him on his legs.

In the meantime, the Schihabel family is looking into setting up a foundation for children that are in Tyler’s situation.