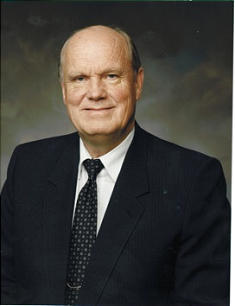 Speaking at the memorial service for his "dear friend," President Boyd K. Packer said Elder Malcolm Seth Jeppsen was "as near perfect of a man as I have ever known."

President Packer, president of the Quorum of the Twelve Apostles, was the concluding speaker at the memorial service for Elder Jeppsen, held April 13 in the Joseph Smith Memorial Building Chapel in downtown Salt Lake City.