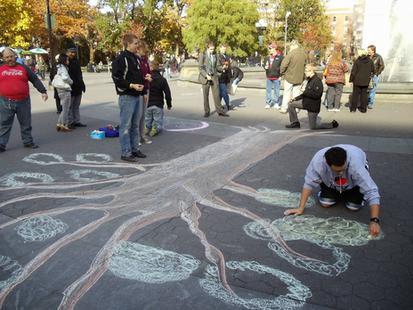 After seeing the positive reactions their first chalk art event at Union Square received last month, missionaries in the Southern Manhattan Zone took on another chalking project in New York City. This time, they drew the scene depicted in 1 Nephi 8 in the Book of Mormon, which is referred to as Lehi’s Dream.

“We actually had an idea about doing the tree of life, and there’s a scripture in 1 Nephi 11:25 where it talks about a fount of living water also being symbolic of the tree of life and of the love of God, and we realized that there was a fountain in Washington Square,” Elder Brad Witbeck of Cottonwood Heights, Utah, said in an interview with the Deseret News. “We figured it would be really fun to use that in trying to teach the vision of the tree of life.”