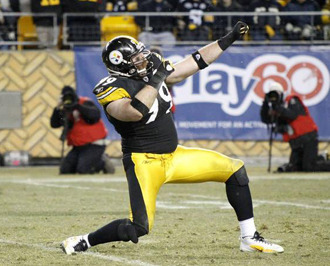 Mormons in the NFL: Headed to the Super Bowl

Like a little troublemaker, Brady Poppinga has been grounded.

That’s how the injured linebacker describes watching his team, the Green Bay Packers, advance through the playoffs to Super Bowl XLV.

“It’s like you are looking out the window and watching your friends play pick-up football in the street,” said Poppinga, a former BYU star now in his sixth year with the Packers. “I love to see the team play well, but to not be part of it is tough.”

Poppinga is one of three Mormons taking part in the Super Bowl. Come Super Sunday, Feb. 6, Poppinga will be on the sidelines in Dallas, just not in uniform. Last October the Wyoming native pulled himself from an Oct. 17 game against Miami because something didn’t feel right in his knee. Further examination revealed a partially torn ACL and resulted in season-ending arthroscopic surgery. He says he could have played on but felt surgery was his best option.