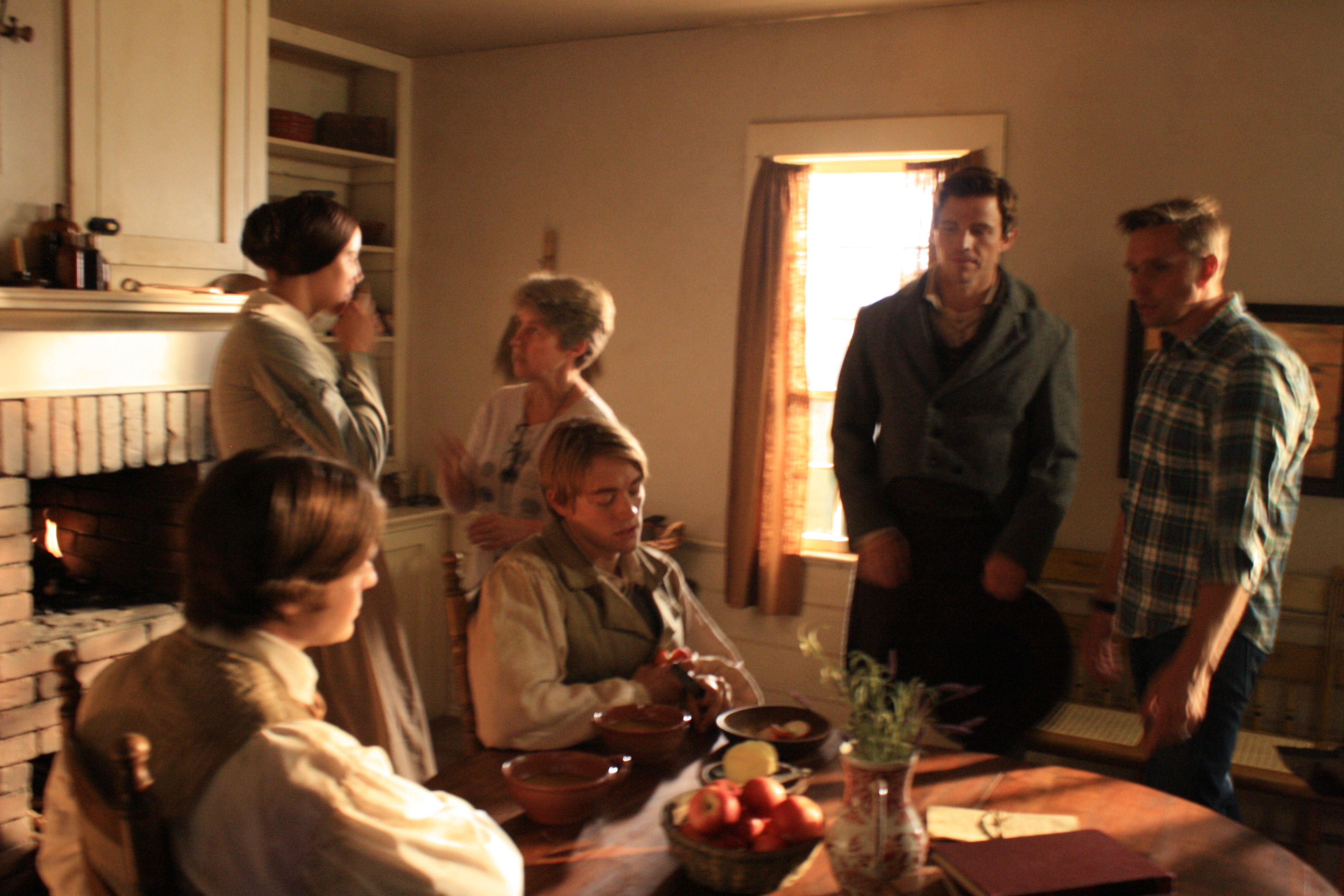 Actors in a new Church history film to be shown at the Priesthood Restoration Site are coached in between takes of a scene featuring Emma (top left) Oliver Cowdery (seated left) and Joseph Smith (standing in gray).

A year ago, the Church site in the former Harmony, Pennsylvania was marked only by a solo monument, recapping the important events that took place in the region, including the restoration of the priesthood and translation of much of the Book of Mormon.

It's a Church history site many overlook in their East Coast travels--but there are plans to change that.

Today, activity buzzes around Harmony, now called the Oakland Township. Though the Church has owned the land for decades, only recently has it started work to restore the site, now that other restoration projects have been completed. For the last year, acquiring permits and relocating a road were cause for a slow start to the project, but with those hurdles cleared, building on the site has begun, though estimated completion is still at least a year away.

Stephen Allen, managing director of the Church Missionary Department, shares why this project and site are significant: "This is extremely historic, because this is the last site of the Restoration that has not yet been fully restored. All the other sites--the Sacred Grove, the sites around Palmyra, New York, Kirtland, New York--have been restored. But the Priesthood Restoration Site right now is under development to be restored."

The restoration project is also unique, says Reid Neilson, managing director of the Church History Department, because "it's a very complex site--this is perhaps the most sophisticated, difficult, and complex site that we've had in terms of geographic location." The Susquehanna river bounds one side of the project, a railroad runs through a portion of it, and until recently, Highway 171 was also problematic. But working to create a cohesive experience, features like a "safety bridge" which crosses the highway will allow visitors to walk from the visitor's center to the historic district on the opposite side of the road.

Along with a new visitor's center and historically accurate reconstructions of the cabins where Emma and Joseph lived and worked, a new 20-22 minute Church history film is being produced that will be shown exclusively on site at the center.

"The movie tells the story of Harmony, Pennsylvania," Allen says. "The film is intended to tell the story of the translation of the Book of Mormon through the eyes of Oliver Cowdery who ended up being the scribe for the book."

One reason for the production of the film is that it helps set straight some historical inaccuracies prevalent in members' minds about the places and manner in which these events took place.

"Most people get their understanding of Church history as much from images as they do from documents," Neilson explains. "And as we started to look at the Priesthood Restoration Site, we got into the records of Oliver Cowdery and rethought what he's really saying about where the location took place. In addition, we were able to go through and look at old newspapers and find out how many boats were really going up and down the river, how busy the site was, and that, in fact, our traditional understanding would have been underwater at that time in May because there was extensive flooding that year."

Artist's depiction of John the Baptist restoring the Aaronic Priesthood to Joseph Smith and Oliver Cowdery. Photo from lds.org

Thus, it's incorrect to picture the decades-old idea that Joseph Smith and Oliver Cowdery were given the priesthood by John the Baptist right on the banks of the river and then were baptized a few feet away. "And I think that gets in the public mind," says Neilson, "and that's how they assumed it happened. So one of the things that we're trying to do is with new artwork is to portray them away from the river, that it wasn't on the banks of the Susquehanna, as we typically portray."

Though there is still no precisely known date or place for the Priesthood Restoration Site, these new discoveries, the new historic site, and its accompanying video promise to explore the three major messages of the site in more detail: "We have translation of the Book of Mormon, we have reception of revelation, and then of course, we have the restoration of the Aaronic, and later, the Melchizidek priesthood, " Neilson says. "So to Latter-day Saints this is as foundational as any site we have."

Learn more about the history of Harmony, Pennsylvania and the restoration project at lds.org