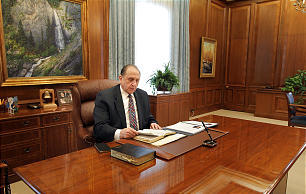 From topping sugar beets and maintaining chicken coops as a youngster to presiding over the Church as it brings relief to the needy in more than 175 countries, President Thomas S. Monson speaks with the voice of experience and authority when it comes to the Church Welfare Program.

He grew up serving others through Church welfare. He was 8 years old when the program was launched 75 years ago, on April 6, 1936. As he grew from his youth into roles as a bishop and stake president's counselor before becoming a mission president and then a General Authority, he worked alongside others on various stake and region welfare projects.

In the Sunday morning session of the 181st Annual General Conference, he said the Church's Welfare Program is "inspired of Almighty God."

Growing up in the fallout of the Great Depression, he saw firsthand the gnawing pangs of hunger and the desperation of want. Through the welfare program and the teachings of his parents, he stepped up to do his part to provide for those in need. He has been at it ever since.