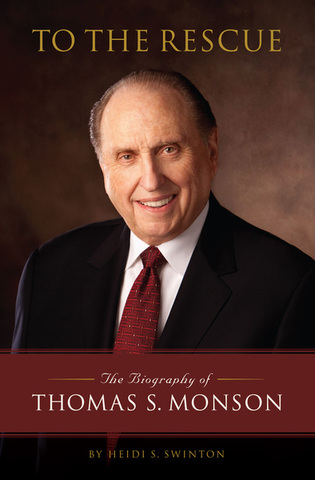 The mission president's wife was making cookies in England when the jaw-dropping phone call came.

LDS Church President Thomas S. Monson was on the line and he wanted Swinton to write his biography.

"I was shocked," Swinton said.

She had met President Monson a few times but didn't know him well. She could think of a hundred other people more qualified to do the project. She was in Europe. She felt overwhelmed, but how do you say no to the prophet? The award-winning author and screenwriter was about to climb the Mount Everest of Mormon literature.

"President, I would be honored," Swinton said.

Exactly 26 months later, on Aug. 18, Swinton was smiling as she stood next to the tall church president as he pressed the button to fire up the printing press for a 588-page book titled "To The Rescue: The Biography of Thomas S. Monson."

"What an incredible experience to spend your time studying such a great man," Swinton said. "There is nobody in the world right now just like him."