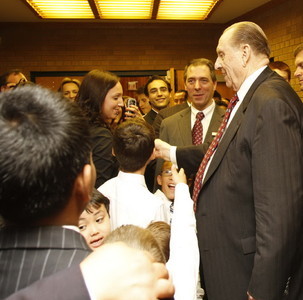 From the moment President Thomas S. Monson set foot into the chapel of the Mississauga Ontario Stake center on Sunday morning, June 26, he felt he was in familiar territory as he recognized people he has known for five decades, back to the time he presided over the Canadian Mission.

As the day progressed and he had time to visit after addressing in a combined sacrament meeting members of the Etobicoke and Churchville YSA wards, he met with some of those friends. He immediately recalled incidents from bygone days and put together names with faces. When he met someone with a familiar name but an unfamiliar face he asked what relationship there might be to someone of an older generation.

President Monson returned to Toronto, which was headquarters of the Canadian Mission over which he presided from 1959-1962 to dedicate on June 25 a camp that bears his name.