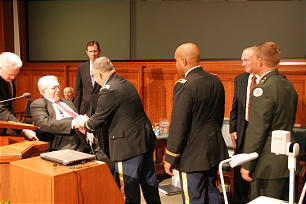 Pres. Packer to military chaplains: 'We depend on you'

At the moment, 75 LDS men serve their country and the Church as chaplains in all branches of the U.S. armed services, an impressive corps, but it has not continuously been so.

Speaking Oct. 4 to an audience of LDS chaplains and their wives in the auditorium of the Church Office Building in Salt Lake City, President Boyd K. Packer recalled a time in the early 1960s when the number of chaplains in the Church had dwindled to five or six.

"Our men were retiring after full service, and we had great difficulty in getting replacements because the regulations had been set that a chaplain, in order to qualify, had to have 90 semester hours in an accredited university seminary," President Packer, president of the Quorum of the Twelve, said during the final session of the 2011 LDS Chaplains Seminar.