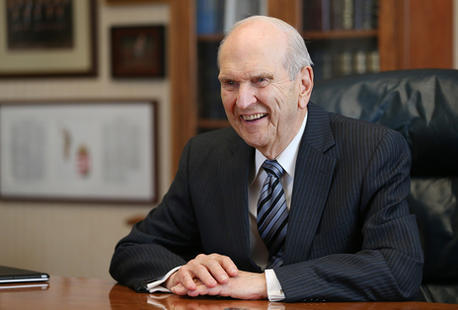 President Nelson: The Calling of 3 New Apostles This Conference Is Possible, But Not Certain

MR says: Many Mormons have been talking about the possibility of getting three new apostles this conference. But past conferences have shown that vacancies in the Quorum of the Twelve don't always get filled.

“Every day is historic in this Church.”

So declared President Russell M. Nelson when a visitor to his office commented about the history-making event of having three vacancies in the Quorum of the Twelve Apostles as the 185th Semiannual General Conference convenes and the likelihood that the empty chairs among the Brethren would be filled during one of its sessions. . . .

“People are wondering if there will be apostles chosen at this conference,” Elder Nelson said in a conversation with the Church News on Sept. 29. He said there probably will be announcements of new apostles, “but that is a matter between the Lord and His prophet.”

“There have been conferences where a vacancy has not been filled,” he explained. “President Heber J. Grant had announced to the Twelve that ‘so and so’ would be called, but it didn’t happen. Members of the Twelve asked him when the conference was over why he didn’t fill the vacancy. He replied that the man he said would be called wasn’t ready yet.”