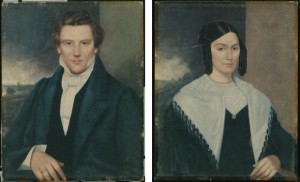 In the stillness of the budding spring of Sharon, Vermont, Kimberly Jo Smith stood in the quiet forest for the first time, looking down on the remaining moss-covered foundation stones of the home where her great-great grandfather was born. Standing at Joseph Smith’s birthplace last May, she completed the circle of her family’s story.

After Joseph’s death his children all chose paths outside of the Church, leaving their children and grandchildren in various places and various faiths. In Kimberly’s generation some of them started to come back. When Kimberly was twelve years old she first learned of Joseph and Emma, beginning a twenty-four year journey into the Church that Joseph restored.

Kimberly now travels the country speaking and singing to share her story. A fireside event for the Montpelier, VT Stake finally brought her to the beginning. The place where Joseph first stepped on the scene of mortality, setting a new course for their family’s story and for the world.