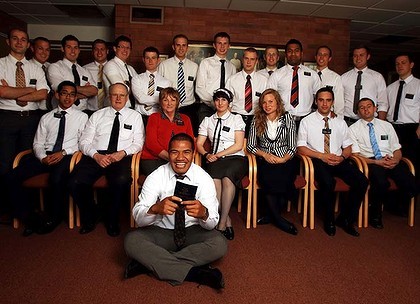 Lagi Setu may as well have been on the moon since the end of last year's NRL season. It is quite fitting, in fact, that the space shuttle Atlantis makes its historic final landing in Florida only two days after the Herald meets the former Brisbane back-rower in Rhiwbina, an affluent northern suburb in the Welsh capital of Cardiff. Even had he been on board the NASA vessel, Setu would have been more abreast of the happenings in his former industry, rugby league, than he has been for the past 10 months. The Church of Jesus Christ of Latter-day Saints often describes its young message bearers - its missionaries from around the globe - as operating in ''a bubble'' during their two years of service abroad. They are not kidding.

Setu is tearing into a slice of pizza inside the Mormon church's Welsh headquarters when we arrive to catch a glimpse of an existence about as far removed from that of an NRL professional as one can imagine. The 23-year-old, a quality second-rower who played 64 games for the Dragons and the Broncos as well as two Tests for Samoa, greets us with a full mouth, then a large smile. This is his first interview in about a year, when he seemed to be deciding between staying with the Broncos or signing with the Sydney Roosters, and he is excited.

Read the rest of this story at smh.com.au