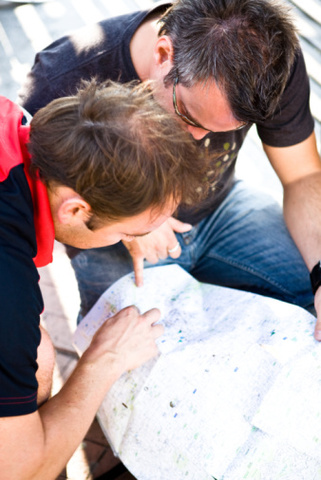 There is nothing in my opinion, more exciting and stimulating than being in an exotic foreign country and getting lost while investigating back alley stores and markets. I love the crowds, smells, thunderous noise of the hustle and bustle and competitive bartering. Equal to that is trying to converse with the locals, trying to figure out what they are saying and how to respond.

Language and words are fascinating. How did we end up calling an older person a "geezer"? In England a geezer is a gangster. How in the world did that change, considering our American English was derived from British English?

Here are some other examples: If you're talking cars with a local in London a "boot" isn't something you wear on your foot, it's a car trunk. A "bonnet" is the hood. If you call someone a "dummy" they may give you a quizzical look since you just called them a pacifier. When we say in America, "My favorite restaurant is a real 'hole-in-the-wall'," in England, you've just said "My favorite restaurant is a real 'automated teller machine'." Don't be surprised at a rugby match (we know it as a football game), if your British friend praises the 'hooker'. Lest you think your friend has no moral scruples, he's just told you that the defensive center is a good player!

Jack Marshall travels the world with Fun for Less Tours.