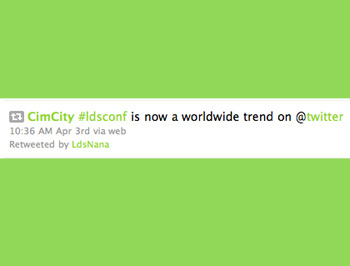 President Dieter F. Uchtdorf suspected it was happening during his Sunday morning remarks.

“With so many social media resources, and a multitude of more or less useful gadgets at our disposal, sharing the good news of the gospel is easier and the effects more far-reaching than ever before,” said President Uchtdorf, second counselor in the LDS Church’s First Presidency. “In fact, I am almost afraid that some listening have already sent messages like, ‘He has been speaking for 10 minutes and still no aviation analogy.’”

While tens of thousands attended the 181st Annual General Conference of The Church of Jesus Christ of Latter-day Saints at the Conference Center in Salt Lake City, millions more watched, listened or followed via the Internet.

For the first time, the church streamed conference live on Facebook and allowed people to use the embed code to stream conference on their own blogs and websites.