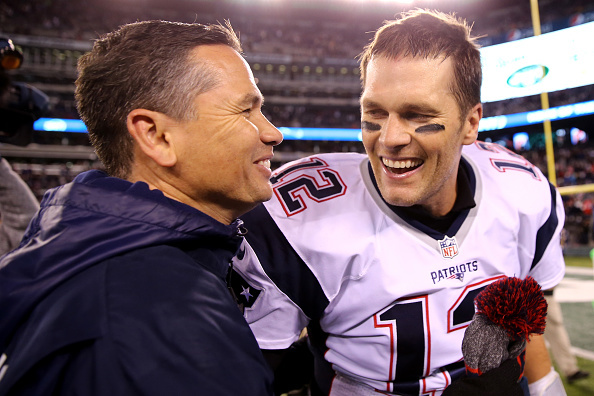 Alex Guerrero bounds in, extending his hand, and it’s hard to take it without thinking, guiltily, that these are the hands that massage Tom Brady.

Ringless, odd for a man married more than three decades. Otherwise unremarkable, but for what they are said to accomplish.

“Here come the hands of Jesus,” some athletes say when Guerrero walks in the room.

The analogy makes Guerrero uncomfortable. “I work really hard at trying to live the tenets of our faith,” he says earnestly, setting those celebrated hands on his desk.

We are sitting in an office at TB12, the business Guerrero founded with his most famous client, the longtime quarterback of the New England Patriots who wears No. 12 and calls Guerrero “one of my dearest friends.”

Brady, most football analysts agree, is the greatest quarterback in NFL history, not only because of his stats, but because of his longevity. At 42, Brady is the oldest quarterback to win a Super Bowl, and he’s talked about playing until age 45, crediting Guerrero for his continued success.

“I couldn’t do it without you,” Brady wrote to Guerrero on Instagram in February, the day after winning his sixth Super Bowl. “Love my Mormons,” the quarterback has also tweeted.

Mormon Life NflNfl,Mormon Life
Comments and feedback can be sent to feedback@ldsliving.com