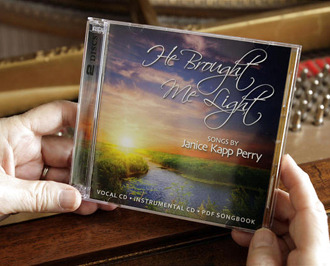 Now in her early 70s, the woman many consider the "matriarch of Mormon music" sometimes thinks about retiring. But the music won't let her. The songs keep coming. There is still more she finds to say. The passion for it is as strong as ever.

"I guess I'll have to keep writing until I can't," Janice Kapp Perry says. "It's my recreation. What else would I do?"

She comes across something of interest, and words and music seem to come. "I've been writing songs that mean a lot to me. And before I know it, I have enough for a new album." That's how her newest CD, "He Brought Me Light," came about.

It's been a while since she's recorded anything. "The music market has certainly changed. Now it's all downloads; fewer CDs are being released," she says. But while this music is downloadable on most Mormon music sites as well as iTunes and the rest, "we wanted to do a CD. And we have such wonderful singers, such beautiful voices." Vocalists include Daniel Beck, Jenny Frogley, Tammy Simister Robinson, Tanya Barkdull, LaRene Tiney, Johanne Frechette Perry and others. The album was produced by Greg Hansen, "who always works such magic."