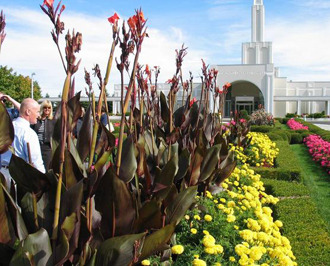 Most brides have a photo shoot in the picturesque Toronto Ontario Temple grounds — and not just those who were just married inside.

It is common to see the temple grounds suddenly fill up with dozens of cars on a Saturday afternoon and a bridal party having their official photographs taken. For many years, a top choice of brides of all religions is the grounds of the Toronto Ontario Temple because of the spectacular display of flowers, shrubs, trees and other landscaping features that make it one of the best natural backdrops.

Brampton was named Canada’s Flower City for a huge greenhouse that for decades in the 20th century specialized in roses and sent them all over North America.