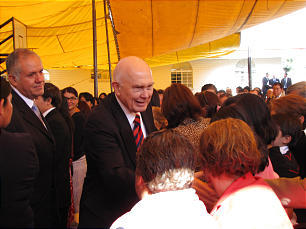 Tour of Mexico reveals the faith of dutiful members

Mexico's dutiful Latter-day Saints would be recognizable to fellow members across the globe. They are diligent, temple-going people who worship, serve and raise their families in faith despite the troubles sometimes found just outside the doors of their homes. Yes, they have worries — but they also live purposeful lives fueled by optimism and gospel principles.

That was the observation made by a trio of General Authorities who recently spent several days touring Mexico. Elder Dallin H. Oaks and Elder Quentin L. Cook of the Quorum of the Twelve, along with Elder Ronald A. Rasband of the Presidency of the Seventy, traveled to Mexico to conduct an annual review of the Mexico Area and also meet with thousands of local priesthood leaders, members, missionaries and Church employees in a variety of gatherings and training sessions across the country. At times the three were together, but they also split up to visit members in several different Mexican cities.