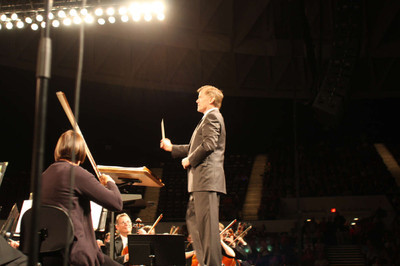 At the conclusion of a concert by the choir and Orchestra at Temple Square in Norfolk’s Scope Arena, on Monday evening, June 20, McDonnell stepped onto the conductor’s podium to lead the choir and orchestra in an encore number, “This Land Is Your Land.”

While it takes years of training to perform with the choir and orchestra, McDonnell had a tutorial that lasted about 10 minutes. A couple of hours before the concert began, the governor arrived at the arena where he met with the choir’s music director, Mack Wilberg, who showed him some of the finer points of directing.