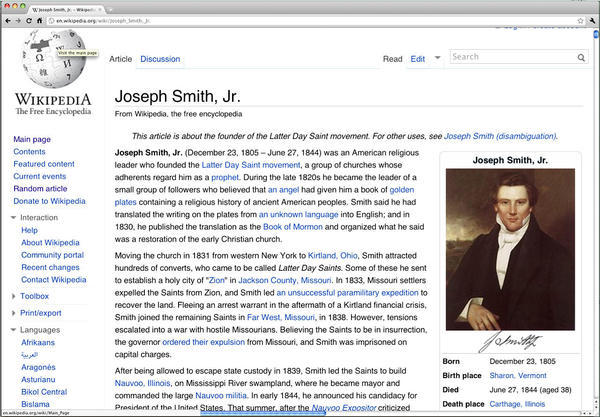 Roger Nicholson was about to send an email, but hesitated. He was staring at his laptop computer screen in an airport in Tel Aviv, Israel, trying to decide what to do. Did he really want to send this?

Nicholson had wrapped up a business trip to Israel and was waiting to take a plane back to his home in the San Francisco Bay Area when he experienced the power of Wikipedia.org to define the world — and his faith.

The e-mail was to a relative on a mission for The Church of Jesus Christ of Latter-day Saints. Nicholson argued in the e-mail that the church was true, that Mormonism is right and that Joseph Smith Jr. was a prophet. He found he was disputing things the doubting missionary had read about the LDS Church on Wikipedia.org, an online encyclopedia.

In an earlier exchange, the missionary told Nicholson that Wikipedia was reliable because the collaborative process ensures its accuracy.

Nicholson disagreed. How could a website be accurate if anybody could change it whenever they wanted to? Somebody had to stand up to this.

He looked at the email he was about to send and made a decision.

Wikipedia could define the world — but not the way he treated others.

"I had a response and was ready to send it, but something just stopped me," Nicholson said. "I decided that I didn't want to define our relationship by contention."

But he felt something still needed to be done. If anybody could edit Wikipedia, why not him?
Read the rest of this story at deseret.com