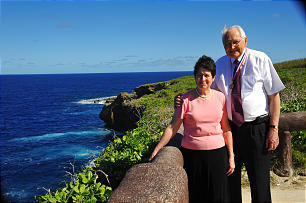 Nearly 800 local members unanimously raised their hands in approval as Elder L. Tom Perry of the Quorum of the Twelve called for a sustaining vote to create the first stake in Guam — the Barrigada Guam Stake — during a conference held on Dec. 12, 2010.

Members of the Church representing a handful of languages and cultures filled the Barrigada meetinghouse to capacity, while members on the island of Saipan, in the Mariana Islands, participated in the special occasion by teleconference. During the meeting, Elder Perry explained that the name "stake" is derived from an Old Testament verse: "Enlarge the place of thy tent, and let them stretch forth the curtains of thine habitations: spare not, lengthen thy cords, and strengthen thy stakes" (Isaiah 54:2). In Moses' time, the stakes held the curtains of the tabernacle. In the Church, a stake represents an anchor for the gospel of Jesus Christ (the tent).