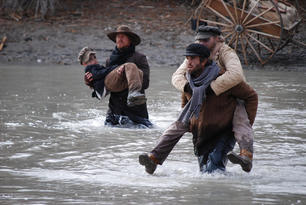 Many, many movies over the past 100-plus years have included characters described as Mormons, ranging from villains to punch lines. But it's only been 11 years now that we've had what is referred to as "Mormon cinema" — that is, theatrical features by Mormons about Mormons and, generally speaking, for Mormons.

Oh, there had been a scattered few before ("Brigham," "The Great Brain," "Plan 10 From Outer Space"), but the film that led to the past decade's prolific Mormon-cinema movement arrived in 2000: "God's Army," Richard Dutcher's comedy-drama set within the missionary program of The Church of Jesus Christ of Latter-day Saints — a very well-made movie that belied its low budget with a witty script, nice performances and slick production values.

"God's Army" was so good — and so profitable — that it gave others the impetus to make their own Mormon movies, and the results cross nearly every genre, from comedies ("The Singles Ward") to tragedies ("Charly") to melodramas ("One Good Man") to fantasies ("Return With Honor") to faux documentaries ("The Work and the Story") — and, of course, further explorations of serving an LDS mission ("The Best Two Years").