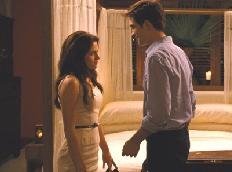 Tomorrow (or tonight at midnight for the Twihards) is an exciting day for Twilight fans. The latest movie in the franchise, Breaking Dawn: Part 1, is coming to theaters (insert screaming young girls).

The books and movies have found popularity among many Mormon moms and teens, as the author is LDS and we Mormons like to stick together and support one another. But they have also found themselves the topic of ridicule with other Mormons for their mature themes and risqué movie scenes.

Breaking Dawn: Part 1 was originally R-rated but was re-cut to give it a PG-13 rating. Whoa, Stephenie Meyer! I’m not here to judge whether or not members should watch R-rated movies (that’s a whole other can of worms), but can you imagine if this film was rated R? Absolute mayhem!

Some people think The Twilight Saga teaches good lessons, like morality, as the main characters remain chaste until marriage. For others, even bringing up the topic of sex (which it does, a lot) is reason enough not to read or watch them. Both sides make a good point. For me, I didn’t mind the books, the movies have been entertaining despite the horrific acting, and I’ll probably still see Breaking Dawn.

But now to my point: What do you think of the Twilight films? Are they appropriate, the best/worst movies you’ve ever seen, and should kids watch them? Take our poll and leave a comment below.