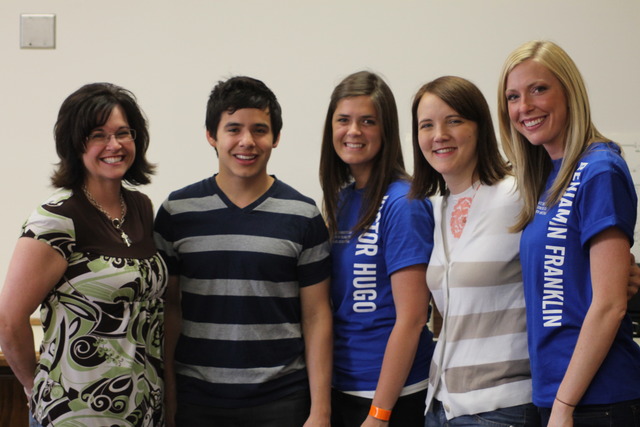 {A&E} My Afternoon with David Archuleta

Ashley Jones is pictured on the far right.

This past weekend, I got to spend a couple of hours with David (my coworkers and I call him Davie) at the BYU Book Festival on BYU’s campus. David was invited to be interviewed live on the importance of books and reading in his life. He spoke in front of a crowd of 100 or so and couldn’t have been more genuine. He mentioned in passing that one of his favorite books is The Alchemist, which I thought was very interesting. (Librarians: you might want to have a couple extra copies of The Alchemist on file—you’re going to have a large group of 14-year-old girls coming your way.)

After his interview, David made his way inside (yes, past the screaming girls) to the bookstore where he was signing his book and CDs. He’s 20 and he’s already written a book. Amazing. During the signing, my job was to walk through the line and write “To:” names on yellow sticky notes so David wouldn’t have to ask how to spell the names. I had an absolute blast. I’ve never written so many girls names in the space of two hours. But you want to know what the best part was? Crouching down (I’m 5’10”) and asking the little girls if they were excited to see David, and take a picture of him. Oh heavens, I wish I could have recorded some of their reactions—totally priceless. There was one little girl—Hannah, nine years old with a mouthful of braces -who, out of excitement, couldn’t have smiled any bigger. I melted. I watched Hannah go through the line and get an individual picture with David where he put his arm around her shoulder. I think her smile is now permanent.

Major props to David Archuleta for being such a great “crush” for nine-year-old girls. He’s got some adorable fans from Provo, UT.