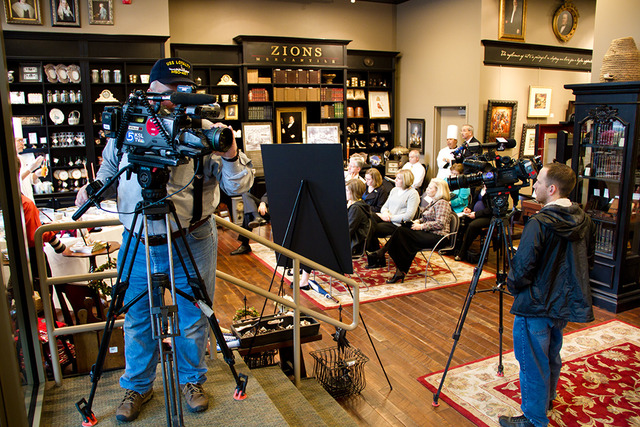 You may have seen our staff's attempts (and success) at reproducing recipes from the new Recipes from the Roof cookbook. (Learn more about the cookbook here.) We came across the cookbook when someone at Deseret Book told us about it, and we were immediately excited to see it. The Roof is, after all, somewhat of an institution of Utah life—and even Mormon life in general (before I ever moved to Utah, I heard my share of engagement stories that started on the Roof).

Earlier this week I was able to attend the first promotional event for the cookbook, which included three of the Roof’s chefs demonstrating one of their recipes from the book. How could I pass up the opportunity to observe real chefs at work?


Chefs Don Sanchez, Pedro Mauricio, and Val Ayrapetov each demonstrated one of their own quick, easy, and delicious recipes from the book—Tomato and Calamata Olive Bread Salad with Roasted Red Peppers, Avocado Gazpacho, and Lemon Merinque Pie Parfaits, respectively. (Yum and yum.)

Here's a video demonstration of just how easy it is to assemble the Lemon Merinque Pie Parfaits.


When I looked through the book, I was impressed with the amazing historical photos of the Hotel Utah (which opened 100 years ago this year). They did some pretty cool things in that hotel.

The Empire Room. Dinner and dancing in this room were only $2.50 per person back in 1936. A coat and tie were required for entrance, and actor Will Rogers was once denied admittance until he found a coat and tie.

The Hotel Utah hosted some of the most pretigious banquets in Utah. The hotel's reputation was so upscale that, each night, they literally "laundered" the money that came through--they washed the coins so they could be clean and shiny.

This table was once found in the Crossroads Grill. It featured a live trout pond that ran down the middle of the table. (So cool.)

The book is definitely a feast for the eyes and the palate. A must-have for the entertainers, dabbling gourmets, and historians out there.

Kate Ensign-Lewis is the Associate Editor at LDS Living. She loves cooking in her tiny kitchen, eating great new foods with her husband, and finding good entertainment and art. She likes (virgin) pina coladas, but does not like getting caught in the rain.