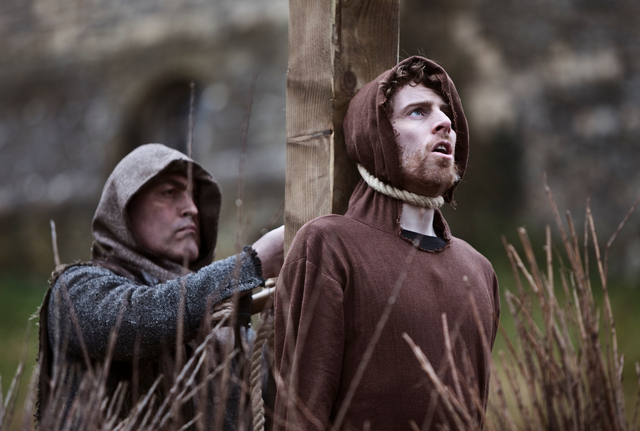 {A&E} Watch This: Fires of Faith

I’m a lover of all things documentary and all things history. I also just so happen to be a big fan of things relating to our church. So when I got the opportunity to prescreen Fires of Faith, BYUtv’s new 3-part documentary about the coming forth of the King James Bible, I was just a little bit excited. (Click here to watch the trailer.)

William Tyndale, who has been lauded over the pulpit of general conferences for more than 30 years (see articles here, here, here, here, and here), is the main star, along with other famous Reformation leaders like John Wycliffe and Martin Luther. But others whom you may not have heard of—such as John Frith and Thomas Bilney—also make significant contributions to the film—and the religious world as we know it today. All of this is placed in the greater historical context of Europe: King Henry VIII’s “runaway libido” that led to a break with the Catholic Church and the creation of the Church of England, the invention of the printing press, the Protestant purge in England by “Bloody” Queen Mary I, and more.

And after seeing so many die for a cause so pure, part three suddenly introduces modern-day documentation as well. My heart broke as so many dismissed the Bible so flippantly, especially now, after knowing how it had come about. And I rejoiced for those who hold to it as a bastion of faith in this world. No, I’m not exaggerating those emotions. I got that sucked in to it.

Of course, it’s not perfect. Some of the acting (this is billed as a “docu-drama”—part documentary, part reenactment) is a little cheesy, and the costumes and settings could have been better. But the history is real and the emotions are true. Scholars, theologians, professors, and religious leaders of all different faiths and parts of the world tell the story of the inception of this great book and foundation of our culture.

And in the end, it left me uplifted and encouraged, with an intense desire to go read the Bible from cover to cover, right this very second.

Each part is airing twice a week, on Sundays and Wednesdays, in a 3-week series, which started this Sunday. And just in case you miss it this round (or want to watch it again), the whole series will also be airing again in December. You can also watch it on BYUtv’s site.