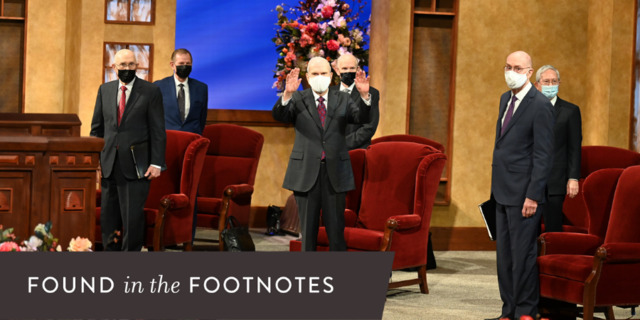 ‘A prominent place on your personal library shelves’: What prophets have taught about general conference messages

Leading up to general conference, Church leaders spend months preparing their messages. In 2016, President Dallin H. Oaks, then a member of the Quorum of the Twelve Apostles, shared that he prays fervently about what he is supposed to speak about each conference.

“I begin that process six months in advance, and usually by two to four months ahead of the April or October conference, I know the subject I'm supposed to speak about,” President Oaks said. “It's indelibly impressed upon my mind, and then I have that confirmed because thoughts begin to flow on that subject—sources come to my attention . . . sometimes I receive a letter from a member that gives me an important insight on the subject—and then I begin writing drafts.”

He shared that he writes an average of 12 drafts for each conference talk.

“I've never given a talk in general conference where I had less than eight distinct drafts, . . . and I've had as many as 15 when I was speaking on an extraordinarily difficult subject. And that takes, of course, a couple of months, and a very good, patient secretary.”

Speakers spend months seeking inspiration from the Holy Ghost for what message they are supposed to share—and then a shift happens. The messages that are prepared for months become ours to study for the next six months. As President Russell M. Nelson said, during general conference we have “the privilege of hearing the voice of the Lord,” and part of that comes because of the preparation of our Church leaders.

► You may also like: Take a look at highlights from April 2021 general conference through these photos

We have been blessed abundantly in this general conference to learn about eternal principles from the Lord’s authorized servants. Now, our individual responsibility is to govern ourselves according to the truths of which they have testified.

President Ezra Taft Benson taught, “For the next six months, your conference edition of the [Liahona] should stand next to your standard works and be referred to frequently.”

In a footnote that accompanies these remarks, Elder Bednar shares additional quotes from other prophets of the Church:

President Harold B. Lee (1899–1973) urged members to let the conference talks “be the guide to their walk and talk during the next six months.” He explained, “These are the important matters the Lord sees fit to reveal to this people in this day” (in Conference Report, Apr. 1946, 68).

President Spencer W. Kimball (1895–1985) also emphasized the importance of general conference messages. He said, “No text or volume outside the standard works of the Church should have such a prominent place on your personal library shelves—not for their rhetorical excellence or eloquence of delivery, but for the concepts which point the way to eternal life” (In the World but Not of It, Brigham Young University Speeches of the Year [May 14, 1968], 3).

President Thomas S. Monson (1927–2018) reaffirmed the importance of studying conference talks. He said: “May we long remember what we have heard during this general conference. The messages which have been given will be printed in next month’s Ensign and Liahona magazines. I urge you to study them and to ponder their teachings” (“Until We Meet Again,” Ensign or Liahona, Nov. 2008, 106).

Reading these quotes caused me to wonder, Are the conference talks “my walk and talk” during the next six months? Do they have a “prominent place on my personal library shelves”? Do I “long remember what I have heard”?

► You may also like: A promise or invitation from each April 2021 general conference talk

In the April 2018 general conference,  where he was first sustained as President of the Church, President Nelson shared, “I exhort you to study the messages of this conference frequently—even repeatedly—during the next six months. Conscientiously look for ways to incorporate these messages in your family home evenings, your gospel teaching, your conversations with family and friends, and even your discussions with those not of our faith. Many good people will respond to the truths taught in this conference when offered in love. And your desire to obey will be enhanced as you remember and reflect upon what you have felt these past two days.”

An echo of that invitation was heard in the prophet’s “Welcome Message” this year when he shared, “As we listen to the messages that have been carefully prepared by our leaders under the direction of the Holy Ghost, I invite you to pray to identify the debris you should remove from your life so you can become more worthy.”