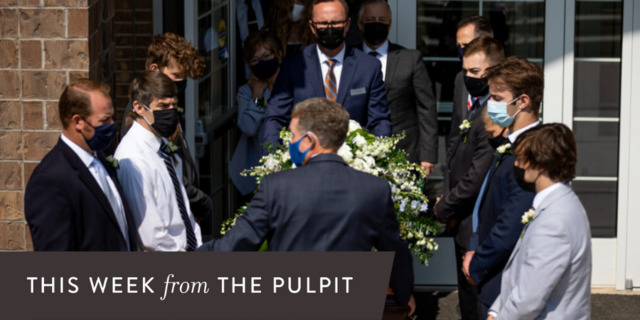 Editor’s note: “This week from the pulpit” highlights recent messages by General Authorities, General Officers, and leaders of the Church.

Eternity. It’s a concept that comes up frequently among members of the Church. And while we may grow accustomed to hearing about it, there are moments when “eternity” becomes not just an idea or a term, but a reflection of our deepest convictions and most tender hopes. And this week, Church leaders have taken to the pulpit to share moments when “eternity” has meant something more. From funeral addresses to messages for temple ordinances workers, these words offer hope and instruction for us all.

The entire First Presidency spoke at the funeral of Elder Dean M. Davies on September 4. They spoke of his dedication to the Church and his calling even as he battled cancer.

“Dear children and grandchildren and those yet to come,” President Nelson said, according to Church News, “as you face your future, you can depend upon the rock solid testimony of this great patriarch, this exemplary, noble and humble man: Elder Dean Myron Davies.”

Elder Davies’s five children also each spoke at the funeral. Aaron Davies spoke of things he and his father had done together in life, and then Aaron’s message turned to eternity.

“The beauty of his life well-lived is that the treasures he shared with all of us do not corrode with time but grow richer and deeper,” he said. “I love my father, and I know I will see him again. A treasure he gave me was a map to find him where he has gone.”

Like Aaron, President M. Russell Ballard is also finding motivation in his life by remembering those who have passed on. President Ballard addressed Manti temple workers and spoke of life following the passing of his beloved wife, Sister Barbara Bowen Ballard, in 2018.

“It has been a long three years and a very empty house,” he said, according to Church News. “Sometimes, it perks up with my grandchildren, and when the great-grandchildren come, it really perks it up. It takes me an hour to put things back into place, but it is all worth it. Knowing that she is there waiting for me, if I can just hang in there to the end, makes it doable and possible.”

Find more messages from Church leaders that will turn your mind to the reality of eternity below.

“Dean’s contributions to the Church and to the people throughout the world cannot be overestimated. He was tireless in his ministry, even as he battled cancer.”

Read highlights of remarks from the funeral at Church News.

The answer to strife and divisiveness in the world is turning to the Savior Jesus Christ and following His example, said President M. Russell Ballard.

“As I listen to and read the news, I say to myself, ‘If they would just accept the Savior, if they would just let Jesus Christ be part of their lives, most of all this mischief would go away.’”

Speaking to Manti Utah Temple workers in the Ephraim Utah Stake center on Aug. 22, President Ballard, Acting President of the Quorum of the Twelve Apostles, urged Latter-day Saints to safeguard all that is “sacred and dear in our lives.”

President Ballard’s address came just weeks before the Church’s fifth temple—which can be seen for miles in Utah’s Sanpete Valley—will close for renovations on Oct. 2.

Read a summary of the message he had for temple workers at Church News.

Elder Cook to BYU-Idaho faculty: 4 principles that set a foundation for eternity

A few months ago, Elder Quentin L. Cook had the opportunity to meet virtually with two officials reviewing the accreditation of BYU-Idaho.

He spoke of the excellent teaching provided by the institution, and then — without hesitation — emphasized the fact that there is a strong culture of belonging at BYU-Idaho.

“It is infectious, and it is extended to everyone — members and nonmembers,” said Elder Cook of the Quorum of the Twelve Apostles. “It is extended to those of different races and nationalities. Belonging is an integral part of BYU-Idaho.”

Speaking to BYU-Idaho faculty and staff in a talk broadcast to the university on Tuesday, Sept. 7, Elder Cook addressed the topic “Foundations for Eternity.”

Read a summary of his remarks at Church News.