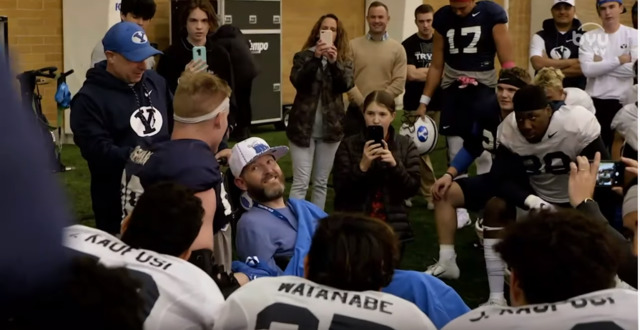 Christopher Clark, a husband, father, and theater director, was recently honored by the BYU football team as one of their True Blue Heroes.

Clark is a Provo, Utah, native who transformed his childhood love for acting into a career of teaching and directing. Latter-day Saints may recognize his talent from his portrayal of Paul in the Church’s “The Life of Jesus Christ Bible Videos.”

In 2016, Clark was diagnosed with amyotrophic lateral sclerosis (ALS), a progressive neurodegenerative disease that affects nerve cells in the brain and spinal cord.

“My brain is sending signals to my muscles, but they aren’t getting through,” Clark explains. “I first lost my legs, then my hands, and then my voice. My brain still functions normally and I still have full physical sensation—my muscles just don’t want to work.”

“I’m sure he’s had down and dark days,” relates Steve, “but I’ve never seen them. He has a lot of toughness.”

Clark was invited to be a part of BYU Football’s True Blue Heroes program, which highlights remarkable members of the community experiencing unique forms of opposition. Clark thought he was simply watching the team practice for their upcoming game, when, suddenly, players ran towards him and presented him and his family with gifts. He even had the chance to run a play with the offense, scoring a touchdown.

“I felt so much love from the team. Many of them thanked me and were a little emotional and I could tell it wasn’t just because they felt bad about my situation,” Clark remarks. “They seemed to see me as a person who was bigger than a disease. That meant a lot to me.”

No matter what his future has in store, Clark is focusing on what he matters most to him.

“The challenge for me is to try to live a full, normal life as a husband and a dad and take everything as it comes.”