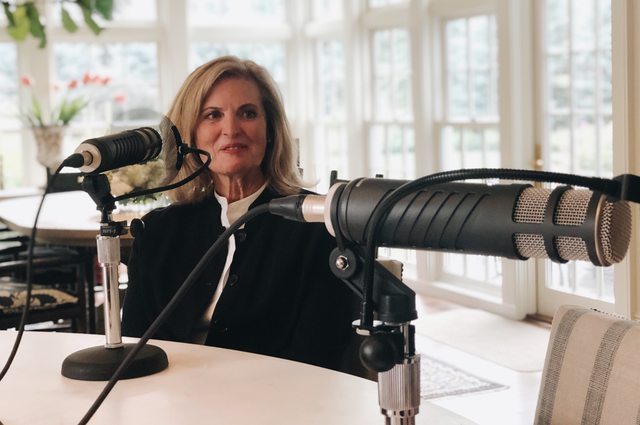 "All In" Podcast: Ann Romney Shares Touching Experience That Summarizes Why She Cares So Much About MS Research

Multiple sclerosis (MS) is a unique disease, with its diagnosis accompanied by a wide range of questions different for every person. There is no clear prognosis, as MS affects each person differently. On this week’s episode of All In, host Morgan Jones asked Ann Romney how she has learned to embrace the unexpected, both from her experience with MS and after standing side-by-side with her husband, Mitt, through two presidential campaigns. Although her life may look different than she imagined, through the Ann Romney Center for Neurologic Diseases, Ann has found a mission to fulfill.

Morgan Jones: As I have been preparing for this interview, one thing that kept coming to my mind is, here is someone who you were side by side with Mitt through two presidential campaigns, and it looked like, at some points, you were going to be the first lady. And instead, your life has taken this kind of different turn. And you have this center for neurological disease, which is doing remarkable work. And I think it's such a good example of living, and then taking the adjustments or course corrections as they come, and then embracing whatever opportunity is next. And so, for you, as you've had to kind of make these adjustments, what have you learned about embracing the plan that God has for us?

Ann Romney: Well, you never know what the plan is, because you can sure take U-turns really fast. So you can't ever count, you think, "Oh, this is going to happen, this is going to happen," and no, that doesn't happen. And so for me, it was an enormous desire, even after Mitt lost, to still feel a way to serve and to still be a light. And, you know, this opportunity presented itself, and just talking with the doctors when we were doing the concept of this whole research center, I said, "Well, I won't have as big of an impact now that I'm not First Lady, but I will still have an impact if we do this research and do this collaboration with all these different diseases." And so for me, it was like, I wanted to still just keep going forward, I just wanted to still keep pushing. I didn't want to quit. And so I still have this enormous desire to serve and to be a light and to give hope. Because you know, you do feel as though I did, I felt like my life had been touched by God's hand, and I needed, I just needed to give back.

MJ: I think that's so inspiring. Because as a First Lady, you would have a platform and something that you devote all of that time toward. But you don't have to be the First Lady—anyone listening—you can have a passion and something that drives you and gives you purpose and fulfills a life's mission. That's something that I really believe in, is that God has a mission for all of us to fulfill and that, yes, there may be moments where we're having to kind of figure out, “Okay, what does this mission look like now?” but it's still ours to fulfill.

AR: Yeah, now I really felt compelled to do this and really joyful about the whole thing. And you really do get sucked into the enthusiasm of the research and getting down to the bare knuckles, and looking at the four different brain cell types and what they're doing and what they're discovering, and, you know, the work that they're doing. And I do, again, I want to give people hope. . . . I met the most interesting person on my book tour. It was on the In This Together book tour that I did. And I was in La Jolla, California, and I was at a bookstore, and people were coming through and I was doing a book signing. And this one gentleman came in, and he had ALS—which is one of the diseases we study—which is Lou Gehrig's, which is one of the most horribly horrible diseases because literally, there is no treatment for it. However, at our research center, we're finding a drug that we think might really help. It works in the laboratory, and we're hoping it will translate. Anyway, he knew all about this, and he came. And you could see, I mean, you could see the disease was really devastating and ravaging his body. He physically got there, but it was very difficult for him. And he had a lot of friends helping him in. And he came to me and, oh my gosh, you know, again, you see physically, "This is who I'm going to be helping." And he knew, he said, "I am so grateful for what you are doing.” He goes, “I know, it's not going to help me," because they have a death sentence really, just such a short amount of time. And he said, "But I'm just so grateful, and I had to come and thank you." And I thought, Wow, that summarized it all. There are all those people out there that are suffering that know this research that we're doing is not going to really help them. But it will help those in the next generation of disease that is coming along. And I just keep hoping that that day is closer and closer. And I do believe it's getting there. We are going to be making breakthroughs.

MJ: As you were sharing that story, I couldn't help but think of all the different people, as we've been reading the New Testament this year, all the different people that came to Christ longing to be healed and how Christ was able to heal them, and that by trying to do this research, in a way, you are following the example of Jesus Christ, and I just I think that's so beautiful.

AR: Oh, that's touching. I had never thought of it that way. That makes me touched. Yes, thank you.