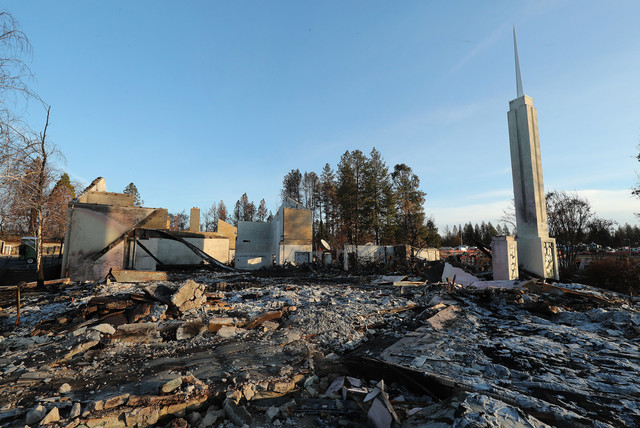 "Angels Rallying Around" Us: How One Family Finds Hope After the Paradise Fire

The Church News' Danielle Christensen recently highlighted Latter-day Saint families from Paradise, California, who lost their lifelong home and the canyons, woods, and neighborhoods that filled many of their memories.

"Ash and debris now blanket Paradise, California," Christensen writes. "The town is just a ghost of what it once was since Camp Fire tore through homes and businesses on Nov. 8, 2018, killing 88 people and destroying 18,804 structures. For outsiders, one might think the devastation would mean packing up and leaving. But for locals like [Sean] Chambers, it means dusting off and starting all over again in the place he loves. 'I wouldn’t want to move anywhere else, especially after seeing everybody come together like they have,' said Chambers. 'I wouldn’t trade it for the world.'"

While Chambers was in Paradise when the fire raged through his town, Paradise resident Irene Ingoglia was visiting her daughter, Angela Grange, on a trip that she claims saved her and her husband's life. The Church News article continues:

"Grange’s father had originally scheduled a leg surgery just days before the fire and had changed plans, deciding to visit Grange in Utah instead. Had they gone through with the surgery, Grange’s father would have still been recovering when the wildfire came. Being elderly and living on a property on acres of land, the chance of them making it out safely would have been small.

"'I felt like the Lord blessed us and was watching over us,' said Ingoglia, who believes that her husband, who had suffered two previous heart attacks, may have had an additional attack due to the trauma if they had been in Paradise during the fire. 'It wasn’t our time to die, I guess, because I think if we had been there it may have been fatal. . . . So, we’re very thankful.'"

Learn how the Grange family and others have found ways to reach out and help those impacted by the Paradise fire, even while experiencing loss and suffering themselves. As Grange notes, "There are all these angels rallying around when people are suffering, and that’s really, really special."

Lead image of the Paradise 1st Ward meetinghouse, which was destroyed in the Camp Fire. Image by Jeffrey D. Allred, Deseret News.