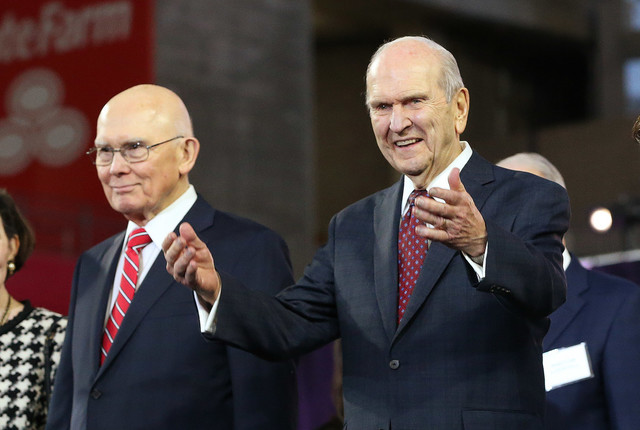 In a rare interview with local Arizona media outlets, President Russell M. Nelson and President Dallin H. Oaks addressed a wide array of topics, including immigration, politics, and the whirlwind of changes the Church has recently experienced. This interview preceded President Nelson's historic devotional to an estimated 68,000 people in an NFL stadium.

About the Church's stance on immigration and other political topics, BrieAnna Frank from the Arizona Republic wrote following the interview:

"Oaks said that the church doesn't take a formal position on political proposals, but that the church issued a statement 'pleading' with government officials to reunite separated migrant families.

"Nelson said that he understands a nation's need to protect its borders, but said he hopes those concerns are balanced with a desire to help others.

"'We hope in every country they will be mindful of the fact that we are our brother's keepers and we are to love our neighbors and we are to keep families together and not separate families,' he said.

"'You don't have to hate your enemy,' he said. 'We would like to spend our time building bridges of cooperation rather than walls of separation.'"

In addition to touching on current political issues, President Nelson provided advice for the youth of the Church, encouraging them to choose the right, love your neighbor, and be kind, gentle, truthful, and fair.

President Nelson also touched on the recent changes in the Church, saying these changes were inspired and resulted from revelation from our Heavenly Father. "As long as we're alive, we'll be changing — hopefully for the better," President Nelson told the Arizona Republic.

This statement reflects President Nelson's statements in a video following his tour throughout South America. "If you think the Church has been fully restored, you're just seeing the beginning," he said in the video. "Wait till next year, and then the next year. Eat your vitamin pills. Get some rest. It's going to be exciting."