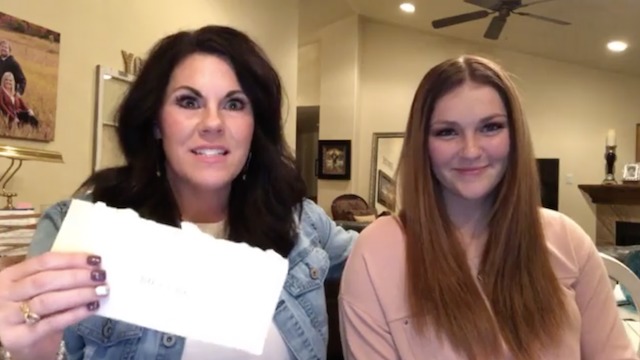 Twenty-nine years ago, 15-year-old Nicole poured out her heart in a handwritten letter addressed  "To my dear future daughter" after a seminary teacher challenged the class to write a letter to a future spouse or child.

At the time, Nicole was growing up in a less-active single parent home, and teenage life was tough. However, she had many friends who invited her to their homes or to church activities, and Nicole was struck by the special spirit that was there. In her letter, Nicole shared both her story of teenage life and her desire that she would be able to make correct choices so that her future daughter could grow up in such a home.

As she wrote the letter, she felt like her future daughter was there in spirit, cheering her on.

At the end of the letter, she wrote, "Happy Birthday. Love, your future mother." The letter was dated August 6, 1988.

On August 6, 2001, Kara Scott, Nicole's first daughter, was born. About 12 years later, Nicole found the letter tucked away on a bookshelf, and she gave it to her daughter Kara. At first, Kara thought it was coincidental that her mother had written the letter to her on the day that would become her birthday. As she grew older, however, performing proxy baptisms in the temple and learning more about eternal families and the premortal life, she saw the letter as a special gift from God, and evidence that our family members watch over us from beyond the veil.

"I feel like I totally would have been there, cheering my mom on and hoping she would make awesome decisions so that I could be with her later on in life," Kara says in the Hi-Five Live video below.

Nicole says that she'd like teenagers to know, "Your future children are watching out for you. They are counting on you to make the right choice."

You can watch Nicole and Kara recount their story below.

Check out another example of the power of letters to posterity Letters to a Young Mormon.

This book is composed as a series of letters. The letters are meant for a young Mormon who is familiar with Mormon life but green in their faith. I imagined myself writing these letters to my own children and struggled, in relation to how we talk about things at church, to say my own piece about what it means to be — as a Mormon — free, ambitious, repentant, faithful, informed, prayerful, selfless, hungry, chaste, and sealed.

The letters do little to benchmark a Mormon orthodoxy. That work belongs to those called to it. Here, my work is personal. I mean only to address the real beauty and real costs of trying to live a Mormon life. And I hope only to show something of what it means to live in a way that refuses to abandon either life or Mormonism.