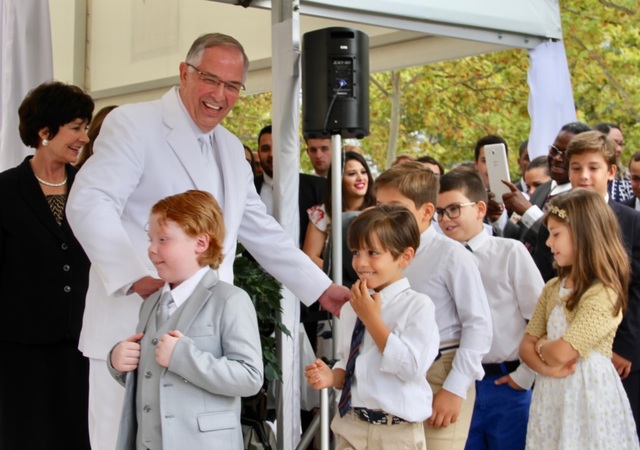 "In this dedicated and consecrated house of the Lord, we too are explorers, searching not for new lands but for something much more precious,” Elder Andersen said at the dedication of the first temple in Portugal, then quoting John 17:3: “‘This is life eternal, that they might know thee the only true God, and Jesus Christ, whom thou has sent.’

“As disciples of Jesus Christ, we enter into this house to discover the things of eternity and to prepare us to one day travel through the veil back to our heavenly home.”

It has been a fundamental part of Portugal’s history for more than five centuries.

And for the second time in the last half-century, a latter-day apostle has evoked the imagery and accomplishments of 15th– and 16th-century sea-traveling Portuguese explorers in a key dedication for The Church of Jesus Christ of Latter-day Saints in this European country.

Elder Neil L. Andersen of the Quorum of the Twelve Apostles dedicated the Lisbon Portugal Temple on Sunday, Sept. 15 — it becomes the Church’s 166th operating temple worldwide — by calling attention to Portugal’s fascinating history of global discovery and likened it to Latter-day Saints going to the temple as explorers seeking to discover something greater than lands and riches.

In earlier interviews with the Church News to summarize the themes of his dedicatory remarks planned for Lisbon, Elder Andersen noted the historic achievements of Portuguese explorers such as Bartolomeu Dias, who helped map Africa’s coastline; Vasco da Gama, who followed Dias’ initial route and continued on to chart a sea-going course to India; Ferdinand Magellan, who is credited as the first to circle the globe, by sailing below South America and through the straits that now bear his name; and even Christopher Columbus, who spent seven years in Portugal observing and learning from other explorers.