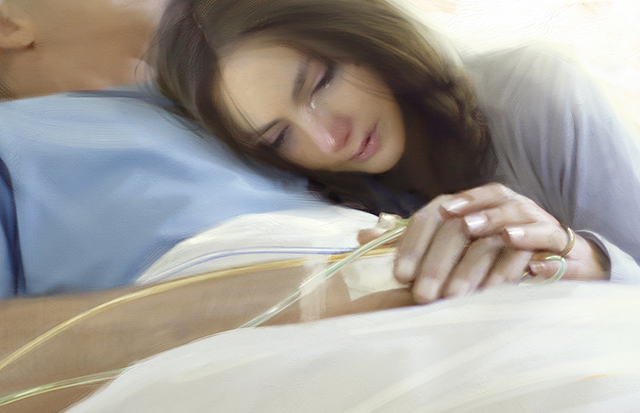 “Elder Bednar, I Do Not Want to Die": The Unexpected Question Elder Bednar Asked a Man He Blessed

In a 2016 Liahona article, Elder David A. Bednar told a powerful story of John, a Latter-day Saint who received devastating news at 23 years old, just three weeks after his temple marriage. He was diagnosed with bone cancer.

About this shattering news, John recorded in his journal: “This was the scariest day of my life. . . . I was the provider and protector of our new family, and now—three weeks into that role—I felt like I had failed.”

His wife, Heather, added: “This was the worst day of my life, but I remember going to bed that night with gratitude for our temple sealing. . . . I would stare at the ceiling and wonder what Heavenly Father had planned for us. Sometimes my mind would wander into dark places, and my fear of losing John would almost overtake me."

After three months of treatment, chemotherapy, and surgeries, John and Heather received a visit from Elder David A. Bednar. About this experience, Elder Bednar shared in the Liahona:

As we concluded our time together, John asked if I would give him a priesthood blessing. I responded that I gladly would give such a blessing, but I first needed to ask some questions.

Frequently in the scriptures, the Savior or His servants exercised the spiritual gift of healing (see 1 Corinthians 12:9; D&C 35:9; 46:20) and perceived that an individual had the faith to be healed (see Acts 14:9; 3 Nephi 17:8; D&C 46:19). But as John and Heather and I counseled together and wrestled with these questions, we increasingly understood that if God’s will were for this good young man to be healed, then that blessing could be received only if this valiant couple first had the faith not to be healed. . . .

After taking the necessary time to ponder my inquiries and to talk with his wife, John said to me: “Elder Bednar, I do not want to die. I do not want to leave Heather. But if the will of the Lord is to transfer me to the spirit world, then I guess I am good with that.”

My heart swelled with appreciation and admiration as I witnessed this young couple confront the most demanding of all spiritual struggles—the submissive surrender of their wills to God’s will. My faith was strengthened as I witnessed this couple allowing their strong and understandable desires for healing to be “swallowed up in the will of the Father” (Mosiah 15:7). . . .

A blessing was given, and weeks, months, and years passed by. John’s cancer miraculously went into remission. He was able to complete his university studies and obtained gainful employment. John and Heather continued to strengthen their relationship and enjoy life together. . . .

Many of the lessons we are to learn in mortality can be received only through the things we experience and sometimes suffer. And God expects and trusts us to face temporary mortal adversity with His help so we can learn what we need to learn and ultimately become what we are to become in eternity.

Lead image from the Liahona